We left Horta mid-afternoon and motored, windless, to Sao Miguel, the eastern most island in the Azores. 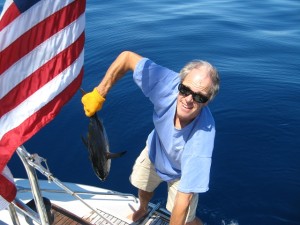 It was an uneventful 24 hour run for the first 20 hours, then — we caught a 25″ tuna!  The two Bobs reeled it in and cleaned it.  One meal in the refrigerator and five in the freezer.  Cheers! 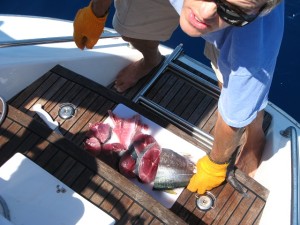 Sao Miguel is the largest and most populated island in the Azores with about 120,000 people.  Checking in was a great first impression.  The Harbor Master, Customs, and Immigration staff was exceptionally friendly and had us checked in quickly.  The city of Ponta Delgada, where the marina is located as well as the main city on the island, is very European and lively.

With the boat settled into a slip, we walked around the area enjoying the architecture and busy outdoor cafes.  What a difference from the other islands.  Tuna had been on the menu for dinner, but it was getting late and the outdoor cafes called to us.  The guys all ordered the local octopus and raved about it.  Each one was a whole octopus with the head lopped off.  Before we left the restaurant they talked to the owner who was thrilled at how much they enjoyed his octopus dish and shared the recipe with them.  He boils the octopus in local cheap wine with some sliced onions and a bit of pepper.  Never salt.  Not sure I’ll try that at home, but everyone was happy.  Ken had made a fish dish the week before with octopus, shrimp and white fish in it that was fabulous.  The octopus was local and very tender.  Eating local is one of the great cultural experiences as we travel. 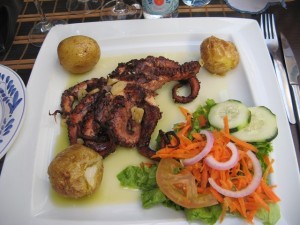