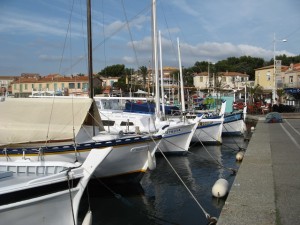 It is Friday afternoon and the skies near Toulon, France are blue and sunny.  This is not what it looked like a few hours ago.

Bob was up until almost 3 am last night getting the Navtex weather software to FINALLY work so we would be able to get up-to-date “local” weather broadcasts in English.  While knowing the weather is always important, it is especially important to have local forecasts on the southern coast of France where the scary Mistral storms can arrive almost without notice.  We spent this morning cheering the success, after so many hours of reconfiguring and software testing, and reading all of the current available forecasts.  No surprises were noted.  The Marin winds which blow, generally from the southeast, can hang in there consistently for several days at 20-30 knots.  They started here two days ago so we have been waiting them out, at anchor, in an inlet that has protection from the NE around to SE.  They are forecast to end tomorrow morning so, once the seas lie back down, we will move on.

With the winds blowing strongly from the east we started noticing the sky in the west turning a dark gray.  Ten minutes later it was black, and then the thunder started with Bob commenting that it did not sound like any thunder he had ever heard before.  Next, the lightning arrived followed closely by horizontal rain and hail the size of ice cubes that felt like they were being shot out of a gun.  It actually hurt.  The seas whipped up into a frothy chaos with large waves breaking all around, tugging at the anchor.  Since we only had protection in the anchorage from the easterly Marin winds we were totally exposed from the northwest where the storm was coming from.

The scramble then began.  The rain and hail were so fierce that we could not see the other boats in the anchorage to see if they were dragging or even where they were.  We also could not see shore.  I looked at the winds speed and saw nearly 60 knots of wind.  It was bad enough in the cockpit that Bob and I headed below with Bob acknowledging that there was nothing more we could do at that time but wait it out.  Not good.  I managed to get all of the cabinets locked before any opened with the boat healing from side to side like we were under full sail.

At the height of the maelstrom we realized that we were dragging on the anchor, heading toward shallow water and toward a rock sea wall that protects a small harbor.  We got the engine started to take some of the pressure off the anchor and be ready to head further out.  All of the boats were dragging by this point and the mission was to not hit anyone else or run aground.

What seemed like a very long time was actually about 35-40 minutes before the winds started to subside and the sky turned blue.  The 55+ kt winds from the west changed back to the 2o+ kt winds from the east as though nothing had happened.  Our nerves knew something had. 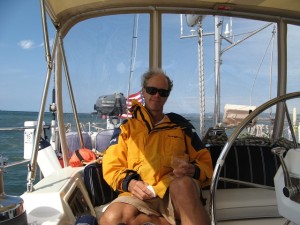 We prescribed a glass of French wine for each other to calm ourselves down!

Surveying the area, all six boats were in new spots, two boats aground.  Crews were scrambling to get their anchors up, move to a new spot, and re-anchor.  Two other boats left.

Looking over our own damage, the dinghy now has a slash in one pontoon and will have to be patched.    We also have a tear in the bimini canvas from the ice which I will patch until we get back to Barcelona, and multiple cuts in the isinglass panels, window screens, etc.  Also, the cockpit radio took a direct hit from hail and is now out of commission.  All in all, we got off easy; things could have been much, much, worse.

Footnote: Although the storm had a lot of the characteristics and ferocity of what is called a “Mistral” the French weather office, Meteo France, has officially classified it as a “freak” storm and not a Mistral.  The next day the newspapers reported extensive property and crop damage and one fatality.