It became clear today that while Flores is rugged and beautiful, there is nothing to keep us here after the first few days.  More clearly, was the realization that unless we found a café, consistent internet and a grocery store that there was going to be a mutiny among the crew!  Ok, so we are out of here.

Mid-day we motored out of Flores, raised the sails and sailed the 135 miles on an overnight passage to Horta, on the island of Faial.  Faial is the most westerly of the central group of Azores islands.  Winds were brisk most of the night and increased toward morning.  We had 33-35 knot winds with gusts to 40 kts.  The boat handled well and we were in Horta, rafted up by mid-morning on Friday.

Horta is fabulous.  Very European, as it should be.  There are 300 to 400 boats here, almost all sail.  We are in the section of the marina where boats are rafted 3 or 4 across to the docks.  We now have two boats between us and the dock so we walk across both of their decks to reach shore–often requiring acrobatic feats to get back and forth.

Like Flores, it is volcanic with no beaches and rocky shores.  Parts of island are sweeping hills of green cascading down to the sea.  Other areas are high cliffs with dramatic drop-offs. 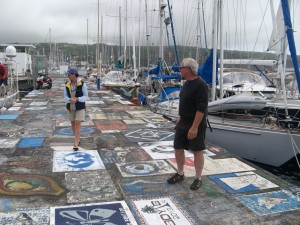 The dock here, for the most part, consists of long concrete quays.  They are known for their colorful wall to wall decorations painted by visiting sailors to identify themselves and their boats.  I never knew sailors were such good artists!  We will have to step up to the plate.

The city of Horta has very narrow streets filled with cafes, shops, the best marine store in the Azores, and a hardware store.  The costs here have really surprised us.  After the sticker shock of food in the Turks and Caicos and Bermuda, food and restaurants are extremely reasonable.  We will enjoy this.  In addition, much of the produce is from the local islands and very fresh.

Our first stop ashore was a café, followed by the marine store where we connected with a RayMarine service guy.  He is on our new friends list.  On to the produce market, the bread store and the butcher for chicken and we were ready for dinner.   Back at the boat we popped the chicken into the oven and waited for dinner to cook.  Forty-five minutes later the chicken was lukewarm and the propane tank empty.  Rats!  Moved the chicken from the oven to the grill and finally had dinner.  Everything shuts down on weekends here so it will be Monday before we can get the tanks filled.  We also now must change over to butane from propane, as it is all that is available in Europe.

We do have a hot plate on board for just such an emergency so out it came and we were able to boil potatoes and the following morning make the very necessary coffee.  This is a coffee loving crew. 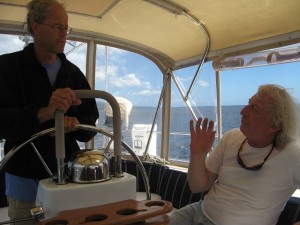 Back to the Raymarine service technician. He shows up ther next morning to trouble shoot two problems with the Autopilot and AIS system.  The AIS system was expectantly, and without warning, switching into silent mode.  The autopilot was making 30 degree corrections when a three degree correction would be sufficient; a little unsettling when you are navigating in tight quarters. After six billable hours he is zero for two on the problems we brought him out to the boat for, but finds two more problems that we didn’t know we had and solves them.  I guess we are ahead of the game.  He suggests the problems he solved might help the problem with the AIS–let’s hope so.   Of course having an expert on board to check things over and answer dozens of stupid questions was worth it no matter what!