In and Around Flores 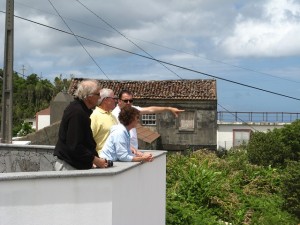 Silvio, a local taxi driver, agreed to give us a half day tour of the island.  His English is excellent — no wonder.  He was born in Flores, then spent ages 10-15 living in the U.S., just south of Boston.  He moved back to the Azores with his parents and is now doing tours of the island as a business.  His pride in Flores, and the Azores in general, really showed.  He very much wants his homeland to flourish and be successful.  That is going to be a challenge for Flores.

The Azores archipelago is made up of nine islands, in three clusters, about 750 miles east of mainland Portugal.  The island of Flores is in the most western island cluster and also is the most western part of Europe.  Flores, like most of the Azores, is volcanic.  The island has no beaches.  It attracts yachters as a stopping point on the way to the Mediterranean.  Tourism is the main economy for Flores, especially through the marina, but it is only active late June through August.  The brief flow of boats cannot support the island for the other nine months of the year.  We were surprised to find no laundry service on the island and wondered why the marina would have nothing.  Evidently a local woman tried to start a service but could not make it viable with such a short season.

The population of Flores has been dropping over the past 50 years.  In 1976 the population was 9,000.  Today it is less than 3700.  Young people leave the island for college or work and do not return.  As the older population dies off, there is no one to replace them.  Several elementary schools on the island have closed and there is now only one high school for the entire island.

The Portuguese government has put millions of euros into the infrastructure of the island.  The roads are winding and narrow, but newly paved and in excellent condition.  Stone walls are everywhere, a blend of newly built and hundreds of years old. 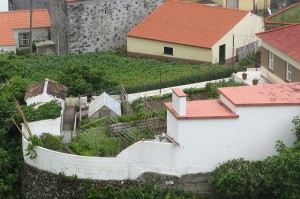 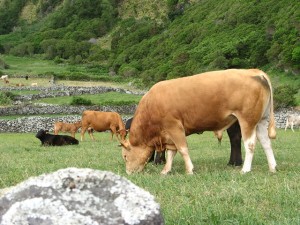 Silvio told us that a large percentage of people work for the government.  The island is heavily subsidized.  The volcanic soil is rich and fertile.  Many people have gardens, but grow only enough for their family and not for export.  Cows and cattle are grazing everywhere but, again, they support the island but do not export.  There is a small cheese and yogurt factory on the island that is subsidized by the government.  It produces only enough for the island.  The cheese is excellent. 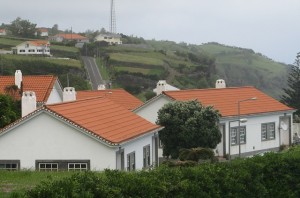 Life here is rugged.  The land is mountainous, lush and green.  The winds whip through and a fog hangs over the center of the island a lot of the time.  Homes are cement, generally painted white, with orange tile roofs.  They do not have central heating, though some have electric space heaters.  With winter temperatures near 40 degrees, one has to be tough.  That certainly cuts into winter tourism.

For all of the ruggedness of the island, Flores is absolutely beautiful.  It is the best of the beauty of Ireland struggling to maintain its independence.  We hope they are able to succeed.

This entry was posted in 2013-2020 BLOGS, Portugal - Azores. Bookmark the permalink.