Still waiting for a weather window to cross the corridor, the 50 mile span between the Dodecanese Islands and the Cyclades Islands where the meltemi winds blow with such force and frequency, we started trying to figure out what else we could do with our guest arriving in one day. 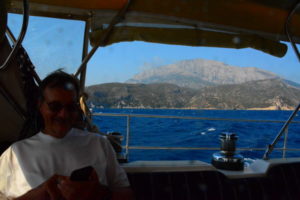 Charles is a good friend from Barcelona who has really been looking forward to joining us for some Greece sailing, as we have been looking forward to having him as well.  We had already postponed his visit once due to the relentless meltemi winds this season. We figured we could at least come up with some version of a sailing itinerary even if it did not include crossing the corridor, which we were anxious to do as well to continue west. We now doubted that we could find any interesting places to go if we didn’t get a break from the winds.

The day he arrived it looked like we might get our break, albeit a slight one.  Looking at the forecasts, we came up with a plan to go west close-in under the island of Samos, protected in the lee of the island. 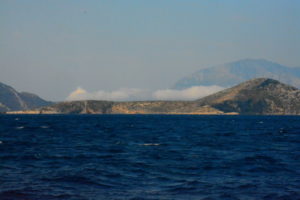 Once we got to the western tip of the island, the winds were forecast to become slightly more westerly, allowing us to change tacks to head in a more north-easterly direction back towards the coast of Turkey and further north. We had hoped to ultimately pick our way north along the Turkish coast and work our way up to Limnos, the northernmost Greek island on in the Sporades group. This strategy was probably a long shot, which we suddenly realized, once at the tip of Samos.  Here the winds and seas were still too strong to make it the short distance up the coast before we could tack around.

Enter Plan”B”; we bare off to the south and fetch a tiny island, Nisidhes Fournoi, that would give us protection from the winds, and allow us to re-evaluate in the morning.  This worked well but we had to give up any thoughts of heading for Northern Greece – we were now committed to waiting for a window to cross the corridor going west.  The anchorage was well protected with room for a half dozen boats around the horseshoe of comfortable anchoring depths. Holding was good but may have been less than certain in some areas. We woke at 0700 to a catamaran drifting past us. The problem was they did not wake up until 0900! We observed their movement and they looked clear to drift out to sea in the strong meltemi winds from the north. Had it looked like they would get into trouble we had already decided we would launch the dinghy and go over to alert them. Finally, we saw some activity up on deck before we had to take action – we were relieved, they were no doubt shocked. We were amazed to observe how slowly the catamaran drifted even with the strong winds coming off the surrounding hills. By the time they woke they were in several hundred feet of water, so the anchor was obviously not giving them any resistance on the bottom.

The next morning the conditions had not changed, so we committed further to the new plan by continuing south to the next island, Patmos. We will have done one big circle! Patmos is where we were when we met our cruising friend one month earlier. At least there is lots to do on Patmos while we waited. 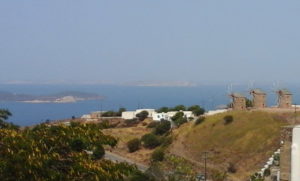 Worst case, Charles could even get a flight back home if we continued to be stuck for much longer.

After two days of enjoying Patmos, we finally got our window, marginal at best, but at least it was chance to go.  We left before dawn to do the crossing in what was still a very rough 12-hour passage. We crossed to Naxos, an island we have been to many times and really love. 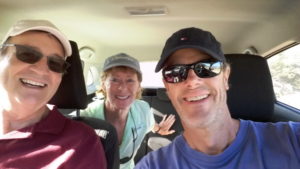 Naxos has shopping, pottery shops and stone sculpting, wine and cheese production, fabulous restaurants, beaches and a whole host of other interesting things to see and do by car.   After two days enjoying Naxos we moved on to Paros.