Home of the Triangle — Samos

Currently we are on the hook in Samos, Greece, waiting! We are located less than five miles from the coast of Turkey.  Samos is the closest of the Greek islands to Turkey, at less than one mile across.

Due to the heat this summer, which was the second hottest on record, and the relenting meltemi winds (see below) the fire risk is especially high. 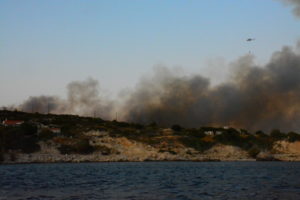 That said, there have been terrific fires on the ridge overlooking the harbor where we are moored. Two water-drop helicopters and two fixed wing planes were used to fight the blaze along with an army of firefighters on the ground. It took two days to extinguish the fires and the damage was extensive to buildings and vegetation. 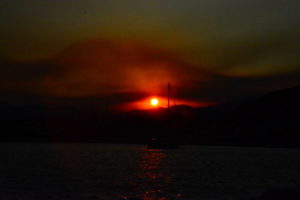 The Greeks, ever not wanting to alarm the tourists downplayed it. One gentleman told us it was just a small brush fire! It is a good thing he wasn’t in charge of evacuations! Fortunately, evacuations were not necessary. The fires did produce spectacular sunsets though–small consolation.

We left Marmaris, Turkey eight weeks ago and while we feel like we have been in a complete stall, we have been very busy–sailing in circles and waiting! The plan of crossing the corridor between the Dodecanese islands and the Cyclades early on and then spending some time in central Greece was changed—by Mother Nature.  The corridor, which is a 50 mile wide open stretch of water in the Aegean running north and south, hosts the meltemi winds.  The north winds blow from northern Greece to the south through the corridor between the island groups and are caused by a simultaneous high over the Balkans and low over Turkey. 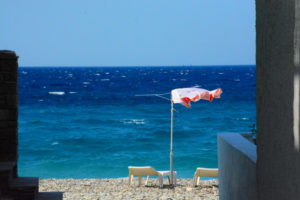 They do not produce rain, just high winds with clear air, so we generally have cloudless skies from May to September.  With the increased wind level seas also become whipped up.  Along with the higher seas, the waves here have a shorter period of only about four to six seconds.

The weather forecast service we use, Poseidon.com, provides both wind and sea state information and is pretty accurate for 4-5 days out.  This is the longest we have ever been held up on one place and it appears it will be another few days.  Normally meltemis last anywhere from 2-8 days, take about 2 days off, and then start again.  This summer has been different, with almost no breaks.  Our strategy has been to pick our way north whenever and wherever we can ducking between islands until we get a big enough break to make it across.  Going north creates a better sail angle for the crossing, i.e. more downwind. The further north you are, the more likely you can cross with more marginal breaks in the wind.

The one day we had a clear shot was about two weeks ago when we were at the island of Patmos.  Ed, who bought our friend Coni’s boat, met us there with his family on board.  We had not met his family before, so we were really looking forward to the get-together.  Ed was also delivering our dinghy chaps back to us from Marmaris where we had sent them back for a repair.  Bob invited them for a sausage and blueberry pancake breakfast–with real maple syrup, on our boat and achieved hero status with the 3 kids for his efforts.  Bob has spent a lot of time coaching Ed through his massive boat projects, mostly electrical.

The challenge of migrants is overwhelming for Greece on the half dozen islands closest to Turkey.  We have watched it over the years that we have been here and are seeing the impact of the shifting population of migrants. We are still seeing it as coast guard boats unload migrants on the quay right across from the anchorage almost every day.  Initially the refugees were primarily from Syria.  They were fleeing their country as it was being bombed and burned and their lives were at risk.  They traveled across Turkey and into Greece, often via human traffickers.  Once here they allow themselves to be “arrested”. They are then processed, and allowed to board ferries to Athens, or use any other means of moving on to northern Greece and further into the EU.  There are no Syrians left on the islands other than by choice.  The new group of migrants are from other countries, including Iraq, Afghanistan, Pakistan, Somalia, Ethiopia, Ghana, and other African countries.  They are moving for economic reasons.  Since the EU does not consider them in life threatening situations, but rather economic, they are not being accepted or allowed to move off of the islands they arrive at.  They still continue to come.  Once here they can’t go forward and they can’t go back at the risk of being cast out by their communities, or worse.  The result is really a crisis that needs to be addressed by world leaders and a workable plan put together.  The living situations are untenable.

Samos, an island population of only 32 thousand, built a migrant camp for 1,500 that now has 7,000 people living in it.  Last night we drove, unexpectedly, past the migrant camp.  It was a shock.  It is on the top of a hill behind the main town with tent-like structures that remind me of the blanket tents we made in the back yard as kids.  They are one up against the next.  I assume they have some type of electricity but question the water and sewage situation.  There is one real building structure at one end assumedly for meals and showers?  It is no wonder that we see families and groups walking and hanging out in the town all day.  Their lives are on hold.

On a more positive note, while in a coffee shop in Samos town, we sat beside a young girl and two young migrant men (maybe 18-20 years old).  She might be Greek but spoke perfect English. 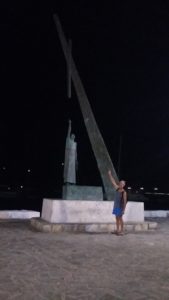 They were playing cards and conversing in English.  Occasionally she would challenge one of them for a word to see if they knew it.  They clearly appreciated it.  It was wonderful to see them having a nice time and enjoying friends as they practiced English.

So back to that triangle: This is the home of Pythagoras, father of the Pythagorean Theorem, and is he ever celebrated here! You remember:

This entry was posted in 2013-2020 BLOGS, Greece - Eastern Sporades. Bookmark the permalink.