FIRE in the cabin!

The word “FIRE” is not something you want to hear when doing a passage, or being on any boat, for that matter! With Charles, our friend from Barcelona still with us, we moved on from Naxos to Paros, still under the influence of the strong meltemi.  The highlight of the passage was an onboard fire – a first for everyone. Talk about getting your adrenalin going! 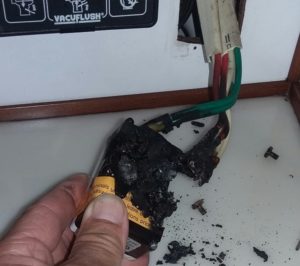 With more heeling than usual, salt water got into the outlet in the aft head and arced. We had departed the island of Naxos that morning; Bob was on watch with Charles. Although we were already across the corridor the meltemi winds were still coming down strongly on the island of Naxos and the water to the west of the island.  Naxos sticks up on the edge of the corridor where winds can come down on both sides of the island with equal intensity when the meltemi is especially strong. This was the case on Monday. We were only trying to make it 15 miles to Paros, the next island over, but it was still a three hour sail in unprotected water where the fetch can come right in from the full length of the Aegean. We left in 20 knot winds and choppy seas but when we got closer to Paros the winds seemed to be funneled between the islands and both increased further. We had been under a 20% reef since leaving Naxos but decided against reefing more since we had less than an hour before we would be in the partial lee of Paros. It was heavy going and the sailing was thrilling, but both of these factors were not that exceptional and, by themselves, did not cause the problem.

The problem was carelessness. With the heavy sailing and delay in reefing the boat was overpowered and heeling more than normal.  We were close hauled on a starboard tack and unbeknownst to anyone, the sink in the aft head, which is on the port side, was in-flooding periodically when the healing would peak. Normally we would take the precaution of shutting the thru-hull, which is on the heavy weather check list, but we did not anticipate such heavy conditions or being so hard on the wind. The sea water coming in the sink drain created a small pool in the corner of the vanity right where the outlet is. Ironically the water sloshing back and forth that caused the fire also put out the fire—luckily. The other contributing factor was the outlet was live, which it should not have been.

When we first got the boat, years ago, Bob discovered that the boat was not wired with a separate circuit for the high amperage outlets in the heads and galley. Aware of this potential safety issue, he started re-wiring the outlets but had only completed the outlets in the galley and forward head. He said the hazard had always been in the back of his mind. It seems like a classic recipe for disaster: unfinished work to deal with known problems that falls through the cracks.

Then there were the series of errors that ultimately led to the fire: not thinking to close the thru-hull, not turning off the inverter when it wasn’t needed, postponing additional reefing, and last but not least, getting caught up in the thrill of the sail.

There was a lot of smoke mess and a melted outlet, but nothing else. It could have been a whole lot worse. We had days of cleaning and doing the modifications to the wiring to finally put the head outlet on the separate circuit. We were lucky this time and hopefully learned from our errors.

Looking at the bright side, the other lesson that came out of this was what to do in the event of smoke and/or fire.  Bob was in the cockpit when he first smelled something. He came down the companionway to investigate. Sara was napping on the settee. Everything looked OK in the salon but when he turned to look aft, all he could see was dark black smoke coming from the aft cabin. His first reaction, after calling FIRE, was to open the engine room to check — mistake number 1. Not seeing anything wrong in the engine area he continued aft to keep looking.  Sara was now fully awake and had grabbed the halon (halotron) extinguisher and fire blanket to bring aft. Bob’s instructions were to not kick off the halon until we assess the situation.

A huge problem, we suddenly realized, was not being able to see anything in the thick smoke, along with not being able to breathe!  After only seconds to look around both of us had to retreat to the salon. Bob figured it must be an electrical fire because of the nature of the odor, and figured everything that was not critical needed to be shut down. Thinking it might be the autopilot overheating, given the heavy conditions, he yelled to Charles to start steering by hand – fortunately we had an extra crew member.  He then shut down the autopilot, along with pumps, the engine mains, and anything else he could think of that was not necessary. Fortunately neither engine was running so this simplified the troubleshooting. He also shut down the main inverter just for good measure – this was fortunate.

Not wanting to fan the flames which we still had not located, all windows were kept closed and Bob made a second attempt to find the source.  This time he made it all the way into the aft head to look around. Figuring he would have to quickly start ripping everything open he felt paralyzed not knowing where to start. Fortunately as he scanned the area he was able to quickly see the source.  The fire and smoke were coming from the sink outlet. This came as a great relief because he could see the smoke was becoming less and the sloshing water was actually extinguishing the burning outlet. Fortunately he had shut off the inverter power so it was just a matter of time for things to cool down. We could now ventilate the boat and return to more normal operations. Back to mistake #1: had there been a fire in the engine room, opening the door could not only have caused a flare-up with the inrush of air, but could have seriously burned anyone at the door. In hindsight, the proper thing to do would be to feel the temperature of the door and act accordingly. Bob said he know this but acted without thinking.  Lesson learned.

The other take-away was appreciating the difficulty of finding a fire with poor visibility while struggling to breathe with acrid, thick smoke.  Grabbing a shirt or towel to breathe through would have helped. Perhaps keeping a mask, and possibly a face shield, near the extinguisher might be a good idea. 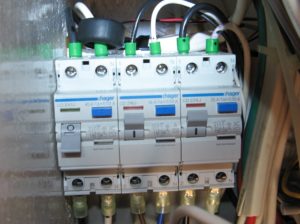 If the inverter circuit had had a RCCB, which is basically a GFI device installed at the main panel, it might have saved the day. A RCCB, or residual current circuit breaker, like a GFI, would trip if the return current was not the same as the current going out. Since the arc was likely created by a short through the salt water to the ground, the circuit would have tripped before anything got hot. A RCCB has now been installed in the output for the main 110V inverter, and also the 230V inverter, while we were at it.  Although the head circuit was rewired to not be energized with main outlet circuit, the addition of the RCCB will protect all circuits from a similar problem; as well as provide protection from electrical shocks.

Further note: I mentioned the over heat situation was likely caused by a short to ground. If the short was to neutral, the RCCB protection device would not recognize the problem, much as running a hair dryer would not trip the device.  Only if there was an overload of the shorted condition would the regular circuit breaker trip.  The risk is that a fire can be started with a partial short, called an arc, which is big enough to cause a fire but may not be big enough to trip the circuit breaker.  To protect for this, an Arc Fault (AFDD breaker) protection device is used. An AFDD looks much like the RCCB and can be wired in conjunction with the RCCB.  This would offer the most protection (standard circuit breaker + RCCB + AFDD) for any circuit. We choose to just go with the protection afforded by the first two devices.  It seemed like a reasonable compromise.