Sarandë and the Interior

After our most challenging summer of sailing we finally left Corfu, Greece on October 19th for the 15 mile crossing to Albania–and out of the EU.  We were over our 90 day limit for our stay in the EU and could have been severely fined but, as the rules go in Greece, interpretation and implementation of the laws depends on the island you are at.  Corfu officials chose to ignore our overstay.  Whew! 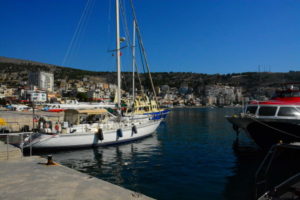 Heading to Albania we headed into the closest town of Sarandes.  Unlike most other areas of Albania it has discovered the benefits of tourism.  There are no areas designated or designed for yachts so we tied up at the commercial Customs dock with just two other boats.  The other two (one shown on our port side with the creme colored decks) having been impounded by the Albania authorities. We guess it was either human trafficking or drug related.

Once checked in they let us stay there for two nights for ten euros per night.  To get to and from the boat we walked through the Customs and Security area, past the metal detectors, and so forth, like at an airport. We just nodded to the officials and kept going. No one said anything and of course the boat could never have been safer.  The same agent who checked us into Albania also rented us a car for a day.

Albania is a new culture and experience for us, with a new language, and new currency – the leke -valued at about 120 leke to 1 US dollar.  A menu saying 250 leke for a cup of coffee seemed shocking at first, but we quickly got used to it.  Italy is only about 60 miles from Albania with daily ferries between the countries.  The result is a strong tie between the countries, and every restaurant in Albania serving pizza and pasta. Albania has had a troubled past.  After being heavily damaged during WWII, when they were occupied first by the Italians then the Germans, they had a communist leader, Hoxha who ruled with an iron fist until his death in 1985. Albanians were not even allowed to leave the country. Mines which had been planted during the war were left in place to discourage visitors. 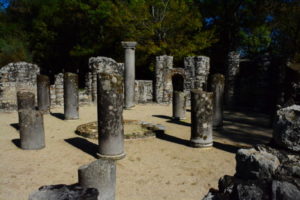 Today they believe most mines have been removed but cannot guarantee it so anchoring is not allowed.  With that info we were motivated to make it to a port each night! 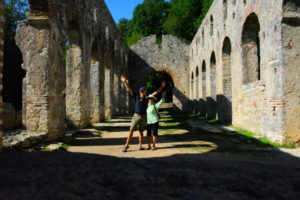 The site, which included baths and a theater, was well preserved and quite intact compared to many other ruins.  There is also a museum which nicely shows the history of the community. 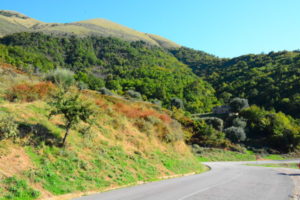 Following that we traveled about two hours north over steep roads with hairpin turns to a castle in Gjirekaster. 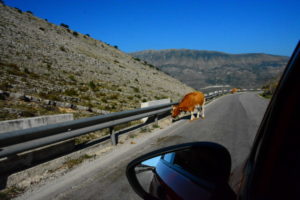 The terrain was beautiful and similar ruggedness to what we have experienced in other parts of Greece and Turkey. The roads, however, were in much worse condition. Many of the dicey areas had guardrails that were either in disrepair or missing. We were also especially careful around the curves were shrines had been erected—and there were many. A few areas had new guardrails but there were other road hazards–livestock! 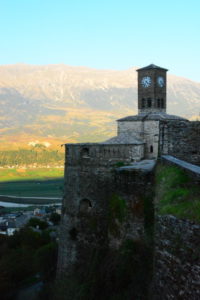 The castle was a great attraction and contained one of the largest displays of German and Russian arms.  The town was adorable with picturesque hotels and cafes. Our recommendation would be to plan an overnight there on a visit to really enjoy what the town has to offer. 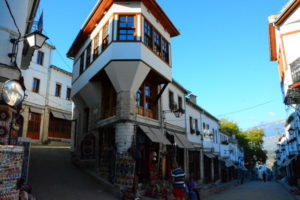 This entry was posted in 2013-2020 BLOGS, Albania. Bookmark the permalink.