We arrived in Sarajevo with our friends John and Eileen looking forward to spending four days exploring the city we had all seen on TV with all its splendor during the 1984 Olympic Games, only to be followed by the horrific Yugoslavian Civil war seven years later. 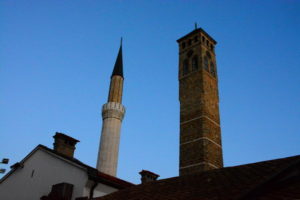 Sarajevo, now the capital of Bosnia-Herzegovina, sits in a valley surrounded by steep mountains on all sides.  It is a long, narrow city where both minarets and church steeples proudly share the skyline.  Throughout the day the sounds of church bells and the Call to Prayer compete compete with each other as the current religions of Catholic, Muslim and Orthodox Christians all live peacefully together — a refreshing model for the world. The Old Town has a very Turkish ambiance with Ottoman architecture and Turkish type bazaars lining the streets.  Remnants of the Olympic events are largely outside the city, up in the mountains. 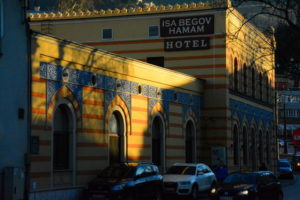 Arriving late afternoon we checked into the Isa Begov Hamam Hotel, located conveniently in the Old Town.  It was built by Isa Begov in 1462.

During the civil war it was almost completely destroyed (see archival picture). After the war the Ottoman style hotel was restored to be a boutique hotel with the oldest and only Turkish bath in the city.  For us, the location was perfect.  We spent the evening exploring the Old Town.  We had hired a guide for Saturday morning who was highly recommended and we were looking forward to exploring the city with an local.

Our world changed overnight.  At six o’clock the following morning John and Eileen told us their daughter had called them from the US to let them know the borders were closing due to the coronavirus.  By the time we got the news in the morning, they had already re-booked their flights out of Sarajevo and were completely packed.  After an early breakfast we drove them to the airport and said goodbye.  They left Bosnia at noon on Thursday and made it home successfully with less than a day to spare.

After dropping our friends off at the airport we went to see the Sarajevo War Tunnel Museum, adjacent to the airport.  It is a tribute to the resourcefulness of the citizens of Sarajevo.  Under full siege, surrounded by the Bosnian Serb Army, supplies were blocked at the only mountain pass through which all commerce passed in and out.  Across the route to the pass was the airport runway which was protected by UN Forces who were required to be impartial.  The Sarajevo’s residents outsmarted the Serbs by going under ground.  Coal-mine engineers spent four months and four days digging a 1/2 mile tunnel, starting from both ends and meeting in the middle.  It became a lifeline eventually bringing electricity, natural gas, and weapons, along with food and much needed supplies.

Shortly after arriving at the museum we heard a tour guide speaking English with two rather bored looking tourists.  We were invited by him to join the group.  He had been a policeman in Sarajevo during the siege and had been wounded.  Hearing the stories from his perspective was priceless.  One night he carried eggs through the tunnel to the city, completing seven round trips during the one night — his personal record. 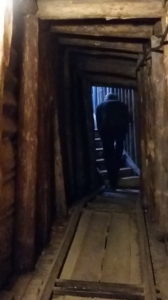 He now makes his living giving tours and taking visitors through part of the actual tunnel..  He explained that in Mostar, and other areas, different religious groups fought against one another.  In Sarajevo, all religions came together as one to fight against the Bosnian-Serb Army attacking their city.  By the end of the war over 10,000 Sarajevo residents had been killed, including 1,600 children.  It was the longest siege in modern history — three years and eight months. 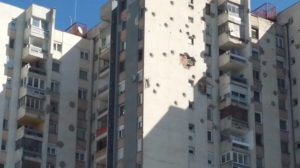 Sarajevo still shows the remnants of the war on buildings scarred by bullets and mortars. Fortunately there are positive signs of recovery in new tall glass buildings with names of international companies, including Oracle and Microsoft. 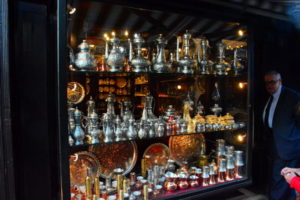 Later that day we were back in Old Town, checking out the amazing coppersmith area where craftsmen proudly show off their wares which are made right there. 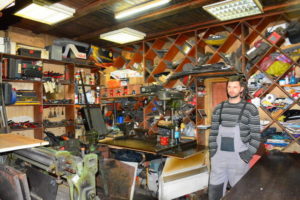 We purchased a small copper coffee pot for making Turkish coffee called a cezve from a craftsman.  He gave us a tour of his shop which had Bob envious of his machinery.  We spent the rest of the evening walking the area, and enjoying  some people watching as we sipped a glass of wine at an open cafe. 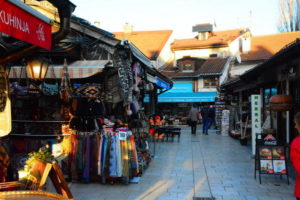 It was to be the last evening of our trip to Sarajevo, now abbreviated by a rapidly evolving international health crisis

This entry was posted in 2013-2020 BLOGS, Bosnia-Herzegovina. Bookmark the permalink.