Friday the 13th – it may have been an omen.  In checking the news from our hotel in Sarajevo we heard rumblings of border closings in various countries in the area.  Knowing Montenegro can be more proactive than its peers regarding the Coronavirus outbreak we decided that we had better get back across the border before we were shut out.  We had planned to spend three more days touring Sarajevo, in what we came to discover is a fascinating and wonderful city — a capital city in a rural country overflowing with beautiful rugged landscapes. 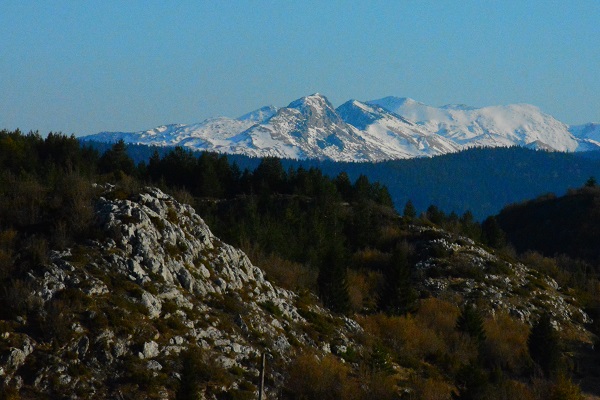 Unfortunately, the quickly changing events transformed our holiday plans into what we would soon realize felt more like an escape from East Berlin when the wall was closing off the city in 1961. Our plan was to enter into Montenegro directly rather than incurring two border crossings if we routed ourselves through Croatia — doubling our risk of being turned away. This would mean giving up the better roads to get back to Tivat, our home town in Montenegro. Using the GPS on the phone Bob identified four possible border crossings from Bosnia directly into Montenegro.  After taking advantage of the grocery stores in Sarajevo to stock up without the big lines we were on our way south, but not until 1500 hours, three hours after we had planned.  The scene at the grocery stores was calmly eerie – stores were packed with people all buying huge amounts of the largest sizes, with the store personnel continually restocking the shelves — though no shortages were observed. 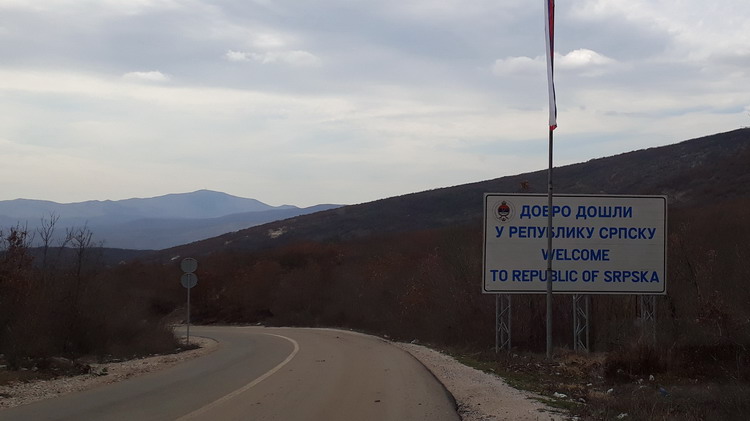 We decided our strategy would be to go for the closest border crossing in the north.  Failing that, we would go for the next one south, and then the third, and so on. Failing all four we would be end up in Croatia resigning ourselves to the two border crossing strategy and hoping for the best. Several hours out of Sarajevo following the GPS directions, we found the road getting more and more narrow. Eventually it became a dirt road which shortly changed to snow and mud, and finally ice ruts that only a 4×4 should undertake.  It was not prudent to continue going forward with 2-wheel drive for fear of getting stuck. 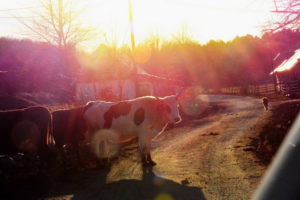 The area is so remote we might not be found for days. We turned around only to be blocked by cows who had moved into the road.  Appreciating it as a moment of levity, we could do nothing but wait — we said moove, they said mooo… Within ten minutes the bovines had moved on and so too had we.  We continued heading for the second border crossing to the South.  As darkness was approaching we debated retreating all the back to Sarajevo. We pulled over to evaluate our options. The roads were poor in either direction and going over the mountains with hairpin turns and few guardrails at night with the only light provided by our headlights, was not appealing. Thinking that going the three hours back to Sarajevo was too much of a setback our thoughts turned to sleeping in the car, even knowing that darkness would bring below freezing temperatures. As we proceeded a little further we came upon a small community and pulled over to recheck the GPS. Bob noticed a sign for a hotel, which was quite unexpected for the middle of nowhere. We went in to check it out.  Not much English but we did manage to communicate that we would like a room for the night. 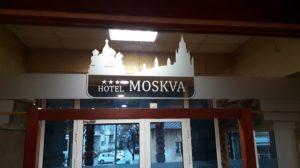 The hotel could have been worse.  It was sparse but clean, and at $25/night for the two of us including breakfast we could not argue with the value. After waiting for a flurry of activity to determine if there was a room that was made-up, and getting the electricity to work, we checked in feeling somewhat relieved to be settled. 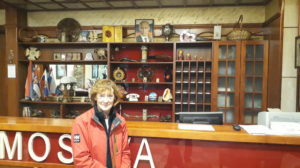 Behind the registration desk, at the top spot on the wall, we could not help notice a framed picture of Putin.  Come to find out, we had wandered into Srpska, an independent enclave of Bosnia loyal to Serbia, and Russia (including adopting a flag nearly identical to the Russian flag)! We had crossed over into Srpska just south of Sarajevo. There was no border crossing as it is actually part of Bosnia-Herzegovina, although they have their own parliament, courts, and customs.  At dinnertime the hotel, which had been nearly deserted, started to fill up.  Finding one person who spoke English, we learned that there is a government project in the area that employs transient workers, many staying at the hotel. The food wasn’t bad. Bob ordered “mixed grill” which consisted of chicken, steak, pork and sausages – any one of which could have been an entire meal.  Bob being a quasi-vegetarian enjoyed the brief allowance.  Sara ordered a small pizza which was uninteresting but satisfying.  That night we got some decent sleep and were back on the road before 0700 skipping our included breakfast.

With the first border crossing not accessible due to the road conditions we now made another attempt for the second crossing.  This time Bob changed the road level parameter in the GPS so it would not put us on anything less than a secondary road. Despite the reprogramming, after about 2 hours that road also began to get narrower and bumpier.  We pulled over to determine our choices, seeing that we still had another 20 kilometers to the border.  If the road continued to get worse as the other road did, or if the border was in fact closed, we would have to undo all of the distance we had made to divert to the third border crossing.  At that point a small truck stopped and rolling down the window the driver shouted: English?

He guessed where we were going and promptly informed us that the border we were attempting to reach was already closed.  Dubious of his claim, he told us he knew this as he worked in the border town.  We told him we were residents of Montenegro. He said it did not matter that we had Montenegro plates on our car or had Montenegrin residency.  The border was absolutely closed–even to citizens.

What can we do? We asked.  The man told us to go for the next border south, another 100 kilometers. But, go straight there and don’t stop, because that border may be closing momentarily. 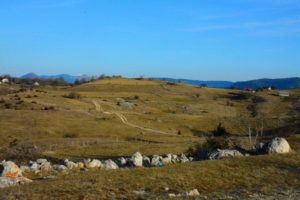 Thanking him, we started back through all the road challenges we had just earned for 20 kilometers to a point where the road splits off to head towards the next border crossing.  Turning left, we headed south again rushing as much as we could given the marginal roads, albeit somewhat improved from what we had just experienced. We started the countdown, reading off our milestones in 10 kilometer increments, as if in the Tour de France. 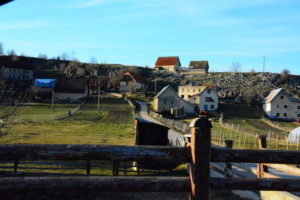 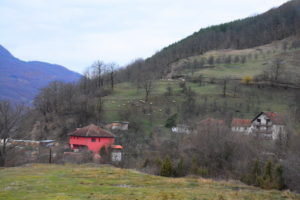 Mindful of our mission, it was impossible to not marvel at the natural beauty of the landscape. As we continued south the incredible bucolic scenery of pasture land and small family farms gave way to fantastic ruggedness. Winding in and out of tunnels like worm holes the road clung to the mountainside with soaring snow covered peaks on one side of us and dizzying gorges with rushing water on the other. If only we were not so panicked to get out of the country in such a hurry this could have been one of our most fascinating drives. The sheer temptation to stop for pictures was overwhelming despite being cautioned to hurry. 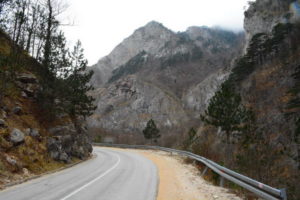 Resisting our better judgement, we allowed ourselves two picture stops, but only for minutes. The man’s last words echoed in our heads: “don’t stop”.

Continuing with our countdown: 30, 20, 10 kilometers, we finally arrived at the greatly anticipated “zero” mark. We crossed our fingers, and holding our breaths pulled up to the border control booth.  We were the only car there.  Rolling down the window and exchanging glances with the officer we suddenly got the sense that all was not OK.  He looked at us like: how could you not know? In broken English he said the border was closed and pointed to a sign posted on his security window.  Showing him our residency cards along with our credentials and explaining that we were trying to get home made no difference.  What do we do now? We asked. He said, go back out, two lefts, twenty kilometers to the next crossing. This was the fourth and final border crossing that we had identified earlier. If this doesn’t work we might as well start looking for a hotel in Croatia for 14 days, or however long.

We turned the car around but stopped to program the GPS for the town he told us to head towards. Not finding the name of the town in the GPS we debated going back to the guard to ask him for the spelling. Not knowing if this would annoy him, but figuring he had nothing else to do, we decided to go back anyway.  Just then a car came through the border crossing from the other direction – we thought he said it was closed. This time when we approached the booth he seemed a little less gruff. After a pause, he said I will let you through, though this crossing is only open to known locals.  He cautioned us that we would probably be turned back by the Montenegrin authorities at their border control just ahead, but we figured he must have thought: let someone else be the bad guy.  This was our first stroke of luck.  The second stroke of luck came minutes later when we realized that the Montenegrin border control building had been apparently taken out by a recent landslide.  They had set up a temporary booth while the excavators were clearing the roadway. Not knowing which way to go –  towards the booth or on the overland construction road we arbitrarily chose the latter.  Fortunately the white Renault we were driving must have looked like a 4×4 construction vehicle not out of place on the rock strewn road. The foreman waved to us to hold up at the bottom of the hill just before a steep incline. We thought he was going to turn us around, but to our utter surprise, he directed the excavator to move so we could proceed and waved us through, completely bypassing the check point.  Not wanting to tempt fate, we continued for 25 kilometers into Montenegro before feeling that we really made it in and gave each other high-fives. Our only fear now was being stopped for illegal entry without stamps in our passports. 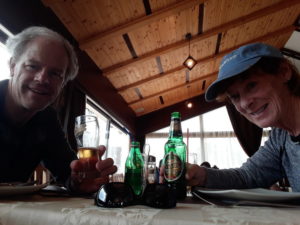 We thought it would be a good idea to lay low so we ducked into a restaurant for an hour to decompress and celebrate with a couple beers. An hour later we were back at our marina feeling safe and hugely relieved!

Footnote: Although our personal experience trying to get back to Montenegro was one of stress and frustration, we are fully supportive of the efforts taken by the government of Montenegro to close borders and require isolation to help mitigate this international health crisis.

This entry was posted in 2013-2020 BLOGS, Bosnia-Herzegovina, Montenegro. Bookmark the permalink.