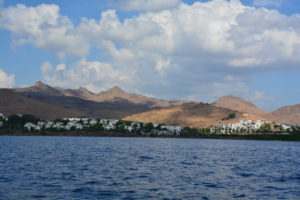 After leaving Oren we spent two days sailing north, close-in around the Budrum Peninsula. This part of  the Carian Coastline of Turkey is all rock and very rugged.

It is beautiful despite the growing numbers of holiday villages (vacation towns) sprouting up. Contrary to the many objections we have heard that the holiday homes have spoiled the view, in our opinion it could be a whole lot worse. The development is limited to clusters of homes and not scattered all over the natural landscape, and the individual homes are all painted white making it look artistic and pleasing to the eye.

Our second night we anchored at Dip Burnu near a small military site, but marked in Heikell’s book as a good anchorage. About 11 pm we were alerted by several military personnel who were shining lights at us and honking a car horn. 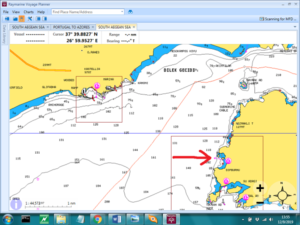 After failed attempts to communicate, due to the language barrier, it was clear that they wanted us to move in spite of the hour.  We raised the anchor and headed back out to sea with no initial plan.  We were less than two miles from the Greek coast and could have gone into Samos, but decided to continue north, staying in Turkey, and arrived at Kusadasi marina at 3:30 am.  A friendly marinaro greeted us and helped us tie up in a slip after which we got some sleep. 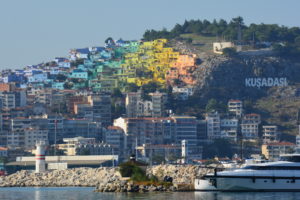 Kusadasi is a fabulous city with lots going on. It is a package tour destination for its good beaches south of the city center and a major cruise ship port.  Cruise ships head here for a night while their passengers spend a day at Ephesus.  The waterfront is active with lots of restaurants, and fishermen fishing directly off the dock.  The holiday homes in this one development outside the harbor at Kusadasi break the traditional whitewash color scheme, but at least the colors are coordinated.  The effect is stunning so hopefully everyone buys into the big picture!

The marina has built a designer shopping and dining mall along the waterfront which is frequented by marina guests and pedestrians alike.  The boutiques are all high end and bar-restaurants cover a range of cousins making is a nice asset to the city.  We spent the next five days getting exercise while exploring the city and back streets, and doing a few needed boat projects.

Continuing our way north Alecati was on our list of spots to check out.  It has become the windsurfing capital of the Med.  As we arrived there the winds were edging into a full meltemi.  Once safely anchored we were entertained watching the vast number of windsurfers buzzing across the harbor—the meltemi was no problem for them!

The following day we were approached by the Coast Guard who informed us that we would have to move as the area no longer allows boats to anchor because of the windsurfers. The officers were friendly but with little English at their disposal they handled the reprimand with great charm: they smiled and handed us a piece of paper, printed in both English and Turkish, explaining the new rules. It was amazingly polite!

We tried to communicate with the use of a cell phone translator that we were dealing with an engine problem and we would move as soon as we got things back together. A few hours later we moved to another outer part of the harbor they recommended where there were no windsurfers but we still had protection from the meltemi.  It was surprising to us that in mid-October the hotels on the beach had all been closed for the season.  Even the bus into town had ceased.

With the wind still blowing, but a bit less, we moved around the Cesme peninsula to the Setur Cesme Marina on the north side.  It is a small, crowded marina, mostly with power boats.  It was Turkey’s first marina and by now looking a bit tired. The location is a big plus–considered a prime location for people who live in Istanbul and Izmir and want to have a boat nearby.  It also doesn’t hurt that Cesme and Alecati are great fun and architecturally interesting towns.