Ayvalik is for Olives

Our friend Robert and his daughter joined us for a combination of sailing and touring.  After picking them up at the Izmir airport our next stop was the village of Alacati for a bite to eat in a cute corner café. 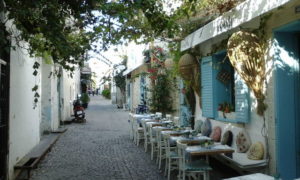 Later, we walked through the old town and enjoyed this adorable village.  Having been part of the population exchange of 1923, it has the remnants of Greek architecture with stone buildings and narrow alleys. 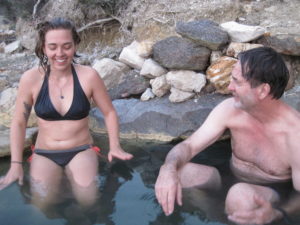 Bademli Limani.  Bademli Limani (Limani means harbour) is in a narrow channel separating a small island from the mainland which has a small fishing village and not much else.  We anchored near some hot springs where Bob, Robert, and Grace all swam and soaked while Sara got organized for dinner.  It was a great overnight spot, very quiet while we watched the fishing fleet of small open boats come and go. 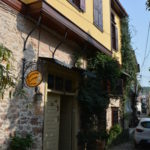 Our next port was Avyalik, the olive capital of Turkey. We were able to get a slip at the marina in Ayvalik.  It is small and well protected, and with a quick walk into the main part of town it was a perfect place to be for a couple weeks.

Wandering around the town is a must.  The old part of town was Greek until the population exchange when the Turks on the Greek island of Lesbos were sent to Ayvalik, and the Greeks in Ayvalik were sent to Lesbos.  The result is that many of the buildings of very old stone are falling down having been abandoned.  Those that have been renovated are beautiful and a real asset to the area.  The combination and contrast within each narrow block is striking. 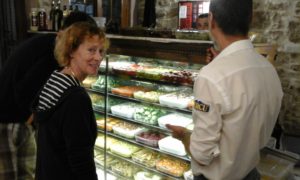 Mezes, small plate appetizers, are available in almost every restaurant in Turkey.  Many restaurants serve mostly the same old dishes.  In Ayvalik we found a wonderful restaurant – Tik Mustafanin Yeri – that had the largest variety of mezes we have ever seen.  They are known for their excellent mezes, and they did live up to their reputation.  We actually ended up having dinner there multiple times while in Ayvalik

Wanting to share some of Turkey’s history with Robert and Grace, we spent a day at Pergamon which was added to UNESCO’s World Heritage list in 2014.  Between 197-138 BC, Pergamon, also known as Pergamum, reached its prominence.  A library was founded which rivaled that of Alexandria, Egypt which was considered at that time to be the world’s greatest.  This was partly due to their major production of pergamena, 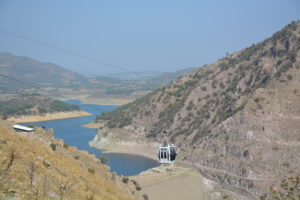 a type of parchment which takes its name from the  the city.  Parchment is an old writing material that was made from stretched animal skin.

Unlike Ephesus, Pergamon is not crowded.  A cable car ride to the top of the hill enables everyone to enjoy the mountainside Acropolis and sweeping views of the region.