Georgia — as in Republic of:

We traveled out of Turkey for a day and into the country of Georgia.  Just over the border is the beautiful and upcoming city of Bat’umi.  A former member of the Soviet Union, Georgia gained its independence in 1991. 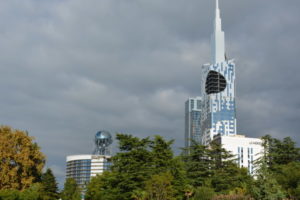 Today it is a modern city directly on the Black Sea with tourism the major industry.

Hotels are sprouting up along with good restaurants, and an active gambling casino business.  We were told that they are positioning themselves as the next Las Vegas.  While we explored the city, several Turks from our bus group spent the day gambling, which is not allowed in Turkey.  Included in our stops was a fun wine store where we enjoyed meeting the owner. 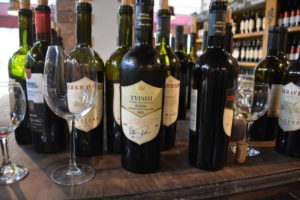 After a discussion on local Georgia wines and some tastings, we purchased a few bottles.

Georgia’s official language, Georgian, has its own alphabet which looks like a series of circles. We would love to have spent more than a day there, but did not have the time. 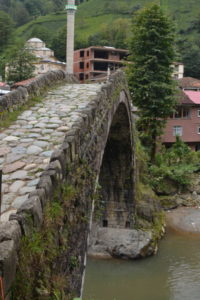 On our way back to Trabzon we visited Ayder and Rize in the tea growing area in Turkey. 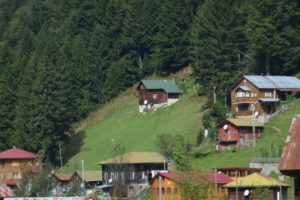 The hillsides all around the town are all planted with tea.  We stayed overnight in the mountainous region of Ayder in what was a local winter resort hotel.  The area reminded us of the scenery and hillside homes of Switzerland. 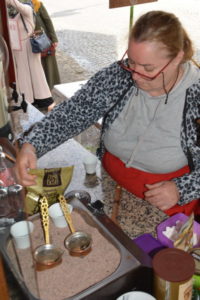 Many local traditions are still alive in this area where we saw crafts and local food production. Tea and coffee is served in traditional tea houses where the Turkish coffee is prepared in a copper pot set in burning hot sand.  In the tea capital of Rize, tea is everywhere.  We could see women on the steep slopes cutting the tea leaves from the plants. 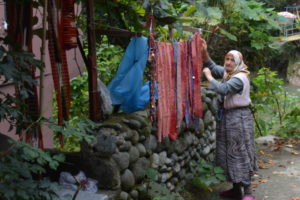 It is taken to distribution companies where it is dried, blended and shipped across the country. 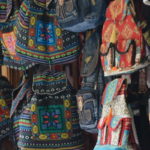 Most people in our group bought some to take and many had lots of it shipped to their homes.

Dinner was included each evening, but the hotels did not have bars.  At the hotel in Ayder we were reprimanded for opening a bottle of wine in the lounge so after dinner we went out on a search. We found a small local bar with live Turkish music that served beer. Hooray!  It was great. 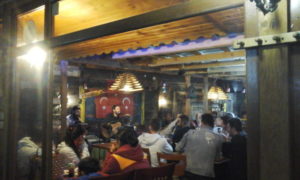 We even found that some of the Turks we were with had followed us along.

We said goodbye to John and Eileen in Trabzon.  They headed back to the US and we headed back to Quintessa.  It had been a great cultural experience for all of us.

This entry was posted in 2013-2020 BLOGS, Georgia, Turkey - Black Sea. Bookmark the permalink.