Top of the Morning to You 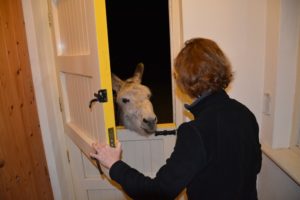 Leaving Belfast we drove south again (less than two hours to Dublin) to our Air B&B cottage on a farm outside of Dublin. 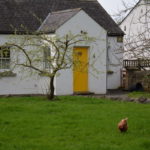 Arriving in the dark we found the cottage surrounded by animals.  They included a donkey (“Donkey-hotay’) who was very social and greeted us as we arrived. He spent most of his time trying to get in our front door.  There were three cows in the pen attached to our cottage, a dog, a chicken, two lambs that were just four days old, and multiple cats. 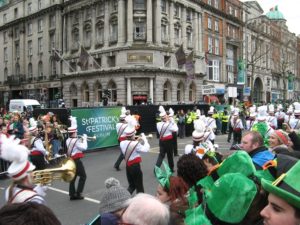 The family living in the main house was delightful and we enjoyed the time we spent with them. The house and farm had been in his family for several generations and they continue to manage the farm on the side while each holding down day-jobs. They had three children of their own and enjoy taking in boarders and exchange students.

For St. Patrick’s Day we took a train from Athy, where we were staying, 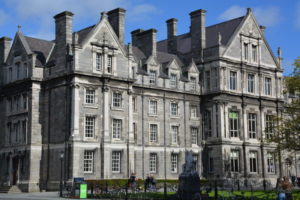 right into the center of Dublin. 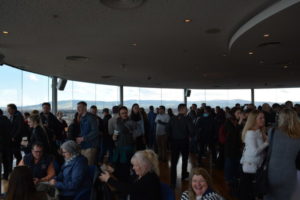 Where else to celebrate St. Patty’s day than Ireland itself, where the day is a national holiday. To get to the parade we merely followed the green hats!    Over several days we spent time at several exhibits including “Epic Dublin–The Irish Journey” which follows the migration of Irish with whom, why, and where they went.  It is well done.   We saw Trinity College and the Book of Kells, then went on to the Guinness Storehouse for a tour of the beer making followed by a sample Guinness on the top floor of the brewery with a 360 degree view of Dublin. 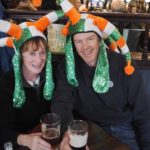 When we first arrived in Ireland we also went to visit Newgrange, one of the ancient mound tombs located along the eastern coast in County Meath just outside Dublin. It is a mound tomb because of its shape which looks like a layer cake with grass as the icing. It consists of 200,000 tons of rock but only rises about forty feet above the surface at the center of the mound. It sits in the middle of the lush Irish countryside and could be overlooked if it wasn’t pointed out. 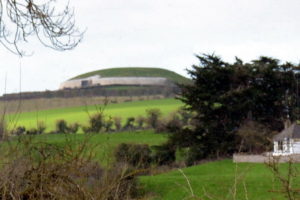 The tomb and surrounding stone carvings are from the Neolithic period, 5,000 years ago, making it older than both Stonehenge and the Egyptian pyramids. 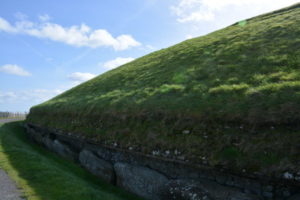 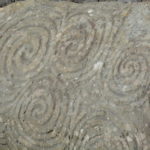 What is remarkable is that a narrow passage was designed into the structure from one edge through to the center that is perfectly aligned with the sun during the winter solstice. During the shortest day of the year, when the sun stops moving north on the ecliptic. The prehistoric engineers made this alignment so precise that a ray of sunlight shines all the way into the inner chambers a distance of 60 feet for only 17 minutes once a year.  The purpose of the structure and orientation with the sun is not entirely known but it is believed to be a place of worship for of a cult society based on astronomy.

This entry was posted in 2013-2020 BLOGS, Ireland. Bookmark the permalink.