March 13th we left Barcelona and flew to Dublin, Ireland to spend the next week, including St. Patrick’s Day.  Our first side trip was to explore Belfast, Northern Ireland.   There was only a sign along the road identifying our entry into another country.

Belfast was an eye-opener.  Not sure what we expected, but what we found it both interesting and surprising.  Belfast is an industrial city where the industry left.  In the early 1900s Belfast was the largest producer of linen in the world and the world’s largest shipyard.  Known for generations of conflict between Catholics and Protestants which labeled the city unsafe for tourists, the ceasefire of St. Andrew’s Agreement in 2006, is enabling it to start to make a comeback. Today the downtown area hosts restored venues for restaurants, clubs and bars. The restored areas seem to be doing well juxtaposed with the new office space and hotels that have gone in. 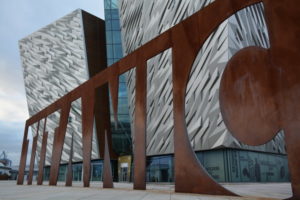 Some of the credit for the revival of the city can be given to the new Titanic Belfast Museum.  The ship – RMS Titanic – was built in Belfast at the very active dockyards.  Fifteen thousand people, mostly men, worked on the construction.  Since that time the shipbuilding in Belfast dried up and all of those jobs disappeared. The dockyards have been renovated into the “Titanic Quarter”. 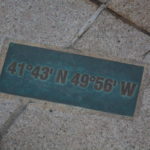 The new aluminum clad museum faces the water in the shape of a ship’s bow.  The exhibits combine photos, video, a ride through an area designed to imitate a construction zone complete with sounds and smells of ship construction.  There is an abstract mock up of the size of the Titanic outside on the slipway along with a creative representative of the route of the Titanic and a plaque showing the latitude and longitude where she went down. 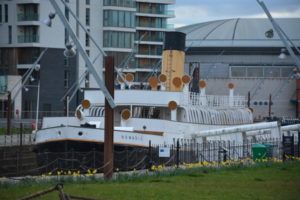 There is also one of the two actual tenders to the Titanic permanently berthed in one of the dry docks. 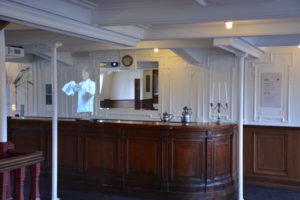 Because it was built at he same time as the Titanic, there in the shipyard, it is the same style and technology of the Titanic which makes it an interesting live study of the big ship.  The entire experience was truly exceptional.  We read that we should plan on two hours to go through it.  We were there four hours (until it closed) and really would have liked another two hours.  It is on our highly recommended list.  Understandably it has become the number one tourist attraction for Belfast. 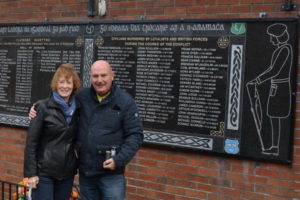 A Black Cab Tour showed us another side of Belfast.  We spent a morning touring parts of Belfast in an old black cab with a 65ish driver who has lived his entire life in Belfast.  At age eleven he was making Molotov cocktails before going to school.  He is still bitter about the division between Catholics and Protestants that has divided the city for so many years.  While the center of the city is sporting cleaned up buildings and pubs, the residential neighborhoods are another story. 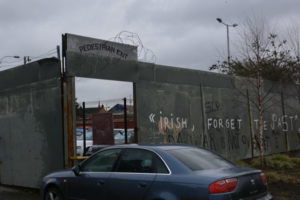 He took us into both the Catholic neighborhood and the Protestant neighborhood.  They are each surrounded by walls with gates that are locked every night for security.  The St. Andrew’s Agreement may have been in place for ten years now, but the war is emotionally very much still on.  The schools are religiously segregated. 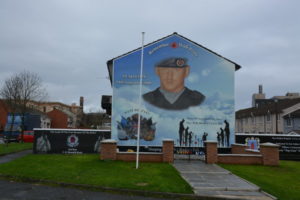 In each neighborhood there are two story high paintings of the “martyrs” who died for the cause that kids see every day.  Unemployment is high among middle aged men.  He told us that neither England nor the Republic of Ireland wants Northern Ireland because it is such an economic drain on the UK. The EU doesn’t want them either for the same reason. The tour was both enlightening and depressing at the same time.  It will take generations before they live peacefully together. 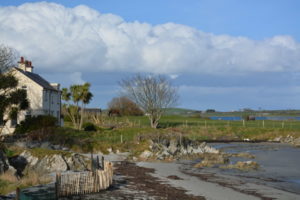 On the way back to Dublin we drove along some of the coastal roads that showed beautiful landscapes which reminded us of New England.

This entry was posted in 2013-2020 BLOGS, UK - Northern Ireland. Bookmark the permalink.