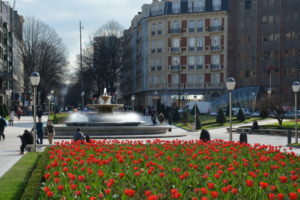 Bilbao was a huge surprise.  Once a gritty mill city of about 350,000, it is now a blossoming economy. It has become the “in” place to go with new architecturally unique buildings, many along the Nervion River which runs through the center of the city, and high quality restaurants including some Michelin stars.  It is surrounded by green mountains. 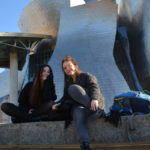 The core of the city is easily walkable and also has a trolley that runs back and forth over a two kilometer distance on a single track.  Initially we chose to walk to really soak in the sights. 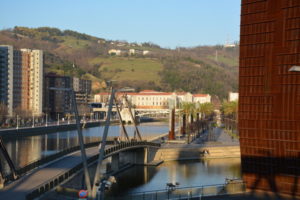 We are always impressed with cities that are pedestrian friendly and Bilbao certainly is.  They have created very side sidewalks along the river where kids are playing, people are walking, and there are benches to rest and people watch.  They also have a separate bike path along most of the length of the river within the core of the city.  The layout keeps everyone safe and moving smoothly. 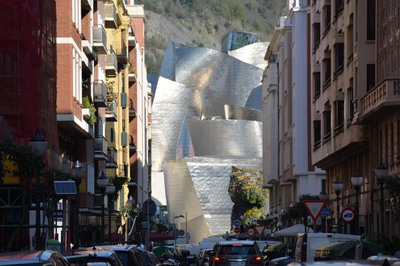 Our first venture was to the Guggenheim Museum.  Designed by the architect Frank Gehry, the titanium clad building opened in 1997 and has become a magnet for tourists.   A unique sculpture on the outside of high chromium stainless steel tulips adds color.  The inside of the museum is as architecturally interesting as the outside, with long windows and towering beams. 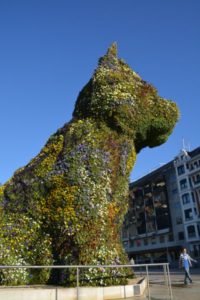 The Guggenheim is also the setting for one of the recent Dan Brown thrillers—Origins.

“Puppy” is the most famous dog in the city.  When the Guggenheim Museum was set to open, artist Jeff Koons designed a West Highland Terrier, over forty feet tall, covered with plants and flowers that are changed out seasonally. 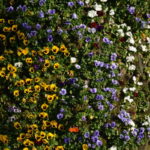 The huge topiary was originally only scheduled to be in front of the museum for three months, but the residents of Bilbao fell in love with Puppy and bought it to keep him there. 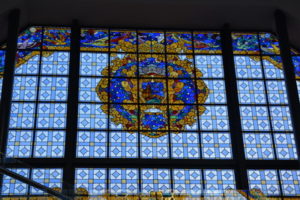 Bilbao’s open popular open market, Mercado de la Ribera is located on the side of the river in an art deco building with fabulous stained glass windows.  Like so many Spanish open markets it is filled with stalls selling fresh fish, meat, vegetables, jamon and cheeses. 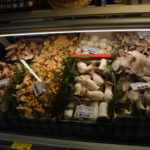 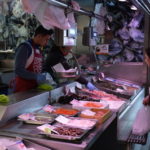 Everything looks wonderfully fresh.  Also within the market are small eateries with tapas and other goodies.  It is always a great place to have a good lunch while browsing or shopping.  The wide assortment of mushrooms really caught our fancy, but we did not have a means to keep them fresh until we returned to Barcelona, so they remained in the market. 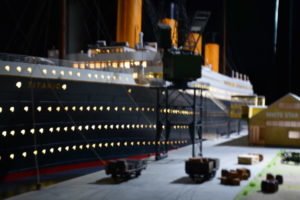 Bilbao has a new Symphony and Exhibit Center which we took advantage of.  We found a Titanic Exhibit going on with film, photos and model of the Titanic on display.  They also had original items from the ship including luggage and dishes.   After an hour visiting the exhibit we went next door to the concert hall and enjoyed a wonderful concert with the Bilbao Symphony orchestra.

Our final venture was the funicular that took us to the top of a peak overlooking the city.  The vista of the river with its architecturally amazing bridges, the Guggenheim Museum, and the mountains that surround the city was excellent.  It gave us a good perspective on the city layout and where we had been.  The time had now come and we returned to Barcelona by train with some great memories of Spain’s Basque and Rioja regions.

This entry was posted in 2013-2020 BLOGS, Spain - Basque Region. Bookmark the permalink.