Family time – Sara’s sister Kathy and her husband, Brad, arrived for an action packed week, including time in Kos, Crete and Santorini. Both are interested the history of Greece as well as seeing new places. so we knew it would be fun. 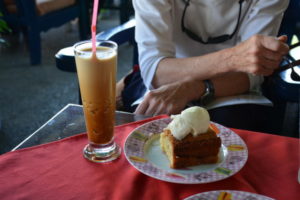 We started their orientation with a Greek dinner onboard just after they arrived. After a few hours of sleep we were off and running. First we went to a nearby “Turkish” town for lunch.   Getting them across to the actual country of Turkey would have been great, but did not work with our schedule. Second best, since they know how much we love Turkey, was to take them out for a Turkish lunch in a real Turkish town in Greece.  We were able to introduce Brad to ayran, a yogurt-based drink that most Turks have with lunch.  Other new foods they tried were: kofte (Turkish spicy meatballs, mezes (Turkish appetizers), and revani (dessert cake made from semolina, with dondurma or sticky Turkish ice cream).  All were hits! 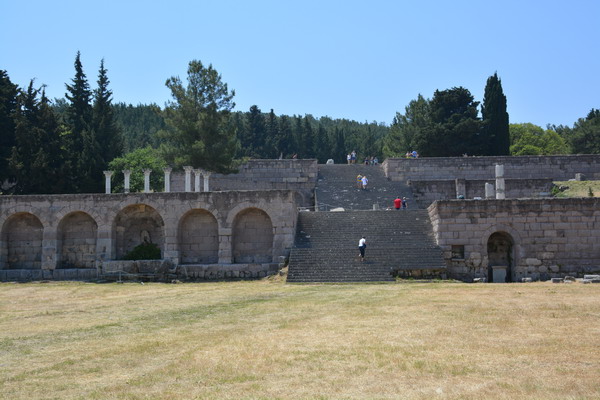 We spent the afternoon at Asclepion, the site of Hippocrates (the father of modern medicine) and the first hospital, which get us back to the title of this post—primum non nocern.  Latin for, first do no harm.  These are words often associated with the Hippocratic Oath, which came from Asclepion here in Kos.  I say “often associated” because point of fact, these words were not actually in the Hippocratic Oath rather another work by Hippocrates called Of the Epidemics. 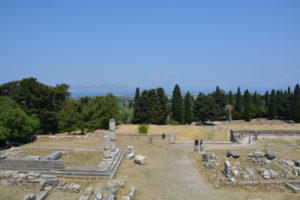 The implication is still the same that doctors should first do no further harm to the patient before proceeding.  Most, but not all doctors, take this oath still to this day.

Asclepion is large and built in three levels on a hillside with spectacular views of Turkey to the east. We had been there before, but it is so simpressive that it is something that can be seen more than once.  It is a must-see when guests visit.  Kos, the home of Hippocrates was most prosperous in the 4th century BC. 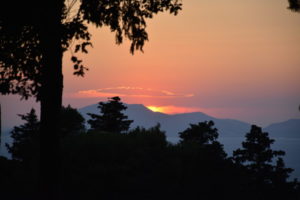 From there we drove up to Zia, a bustling small town on the side of the tallest mountain on Kos. With the spectacular views of Kos and neighboring islands, it is no wonder the view of sunset draws nightly crowds. We were happy to be among them.

Next up, The Castle of the Knights of St. John. It amazed us that it took until just before we left Kos to finally visit the landmark Castle in downtown Kos Town. The castle is a 14th century castle located on the harbor right in the center of town.  We have spent months walking past it almost daily. 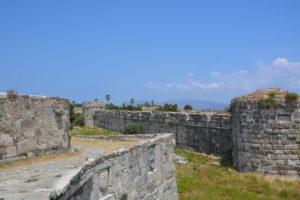 Most of what remains today is the exterior walls, but still worth the visit inside.

This entry was posted in 2013-2020 BLOGS, Greece - Dodecanese. Bookmark the permalink.