We spent April and early May doing boat projects getting ready for this sailing season, and also did some more exploring around Kos. Kos is slowly coming back to life as the days warm and stores, hotels and restaurants begin to open for the summer.

Planters are being refilled and tables and chairs are re-appearing on the sidewalks. Several people have told us that reservations in the hotels are strong once again, after the island had two difficult seasons with fears from the migrant invasion of 2015. It had a huge financial impact on Kos.

Robert and Alyssa joined us aboard for a few days mid-May and afterwards they spent a day exploring Kos while we finished installing an additional set of cleats on the back deck. The next day, we headed out for a short sail with an overnight in Nisiros. 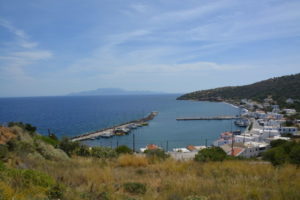 The winds were up with a meltemi going through but we were determined to get the sails up.  It was also a great opportunity to test everything as it was our first venture out this season after many boat projects. High winds then no winds: after a brief bit of excitement the winds died and we motored the rest of the way to the snug little harbor of Palon. Palon is a well protected harbor on the north side near the western end of Nisiros.  The seawall provides good protection from the omnipresent meltimi winds. 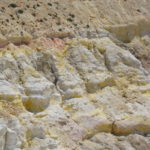 In Nisiros we rented a car and traveled first to the volcano, still active, in the center of the island. It has small bubbling pools and you can hear the sound of the gases escaping at the bottom of the crater. We then drove up to a small village in the hills behind the marina where we had lunch with beautiful views out over both Nisiros and the neighboring islands. 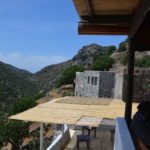 At the marina Robert and Bob met a Greek sailor who had arrived in his steel hulled boat, just completing a three year circumnavigation.

We wrapped up the day by going to Mandraki Harbor, the main harbor on the island, for sunset then finding a very traditional Greek taverna nearby.  The staff did not speak much 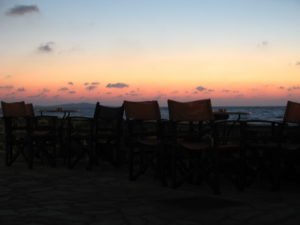 English but their hospitality was wonderful.

The following day we needed to get back to Kos early for Robert and Alyssa to try to catch a flight on to Santorini.  They had planned to take a ferry but were caught by the, almost annual, ferry strike.  It seems that everyone knows they will be back to work in a few days with the ferry system running at its legendary efficiency.  I guess they feel they just need to keep reminding the public how vital the ferry system is to the country. The winds were up providing us a spirited sail back to our marina.

This entry was posted in 2013-2020 BLOGS, Greece - Dodecanese. Bookmark the permalink.