Crete was a quick and easy one hour flight from Kos. We stayed at the Capsis Astoria Heraklion, a great location in the city of Heraklion, Crete’s capital. We were able to walk to restaurants, the waterfront, and the Archaeological Museum. 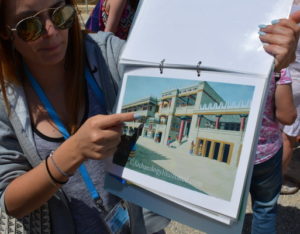 A quick cab ride took us to the Palace of Knossos where we hired a private guide which we all agreed was well worth it.

Knossos, built in 1700 BC by the Minoans was the capital and palace for the legendary king Minos. The Minoans were the first civilization in the Aegean. 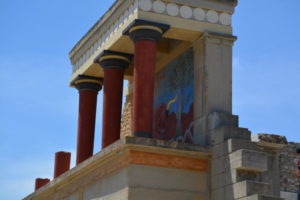 The grounds were excavated from about 1900 by Sir Arthur Evans and later by the British School in Athens.  It is known for having running water and a proper drainage system, which was quite advanced for that time.  The reconstruction, however, has not been without controversy as Sir Arthur Evans “reconstructed” some walls and pillars rather than leaving the original structure.  For the average person it makes it easier to picture what the original palace would have looked like. For archaeologists, the reconstruction has forever damaged the site as an archaeological study. 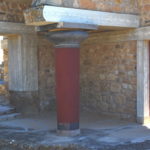 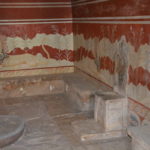 visit after the Palace. It is interesting to note that because the roman arch had not been 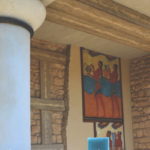 invented yet and the use of stone lentils was limited to short spans, wooden columns and beams were used to support the upper stories.  Because of this, the construction did not endure over the centuries and was subject to fires which contributed to the downfall of the Minoan civilization. 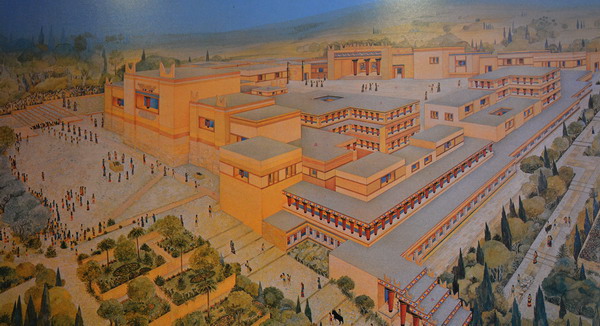 Artistic rendering of Knossos in the 15th century BC 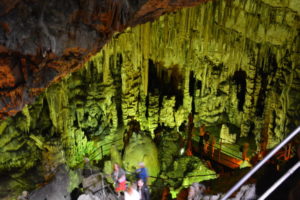 Adding to our history tour, we rented a car and headed about 1 1/2 hours to the birthplace of the mythical figure Zeus. It is a bit of a hike up a hill, then steep steps down into a dark cave to see the stalactites and stalagmites but worth the effort.

Our final stop in Crete was Spinalonga Island.  It is a five minute boat ride from the mainland, and now deserted.  From 1902-1957 or so it was a leper colony for the country of Greece.

Anyone who contracted leprosy, from even as far away as Athens, was sent to this small island.  Most people had never heard of it until the British author Victoria Hislop wrote the book “The Island”, telling the story of the island’s use.    The book tells the fictional story of one 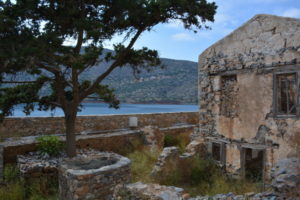 family while including facts about the island and its inhabitants during that time.