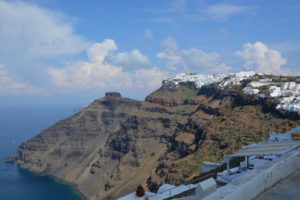 Santorini, also known by locals as Thira, was less than two hours by fast ferry from Crete.  We arrived late morning and starting exploring, with a walk along the caldera to see the cascading of white hotels and restaurants along the edge.  Since we were early in the season the weather was expectantly cool and rainy.

When we arrived the fog at the top was so thick one could not see the water at bottom.  Thankfully, the next day everything had cleared up and the views were spectacular as promised. While we had been there several times prior, the view never gets old!

We caught the bus to Oia for lunch overlooking the northern part of the island and a view back over the caldera.  It is the most upscale part of Santorini and absolutely beautiful. 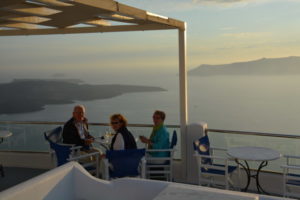 In the evening it gets very crowded with hordes of people rushing there for sunset. We skipped that and wandered back to our hotel overlooking the caldera and enjoyed the sunset from our roof deck with a bottle of wine.

Our last day together we took a bus to the southern end of the island then a small boat to Black Beach where we had a fabulous lunch at the restaurant there overlooking the beach and bay. To this day, Bob says they had the best octopus he has ever tasted. The next day, 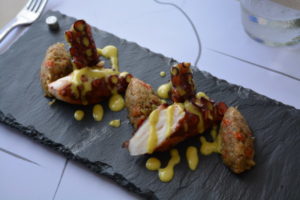 we left Kathy and Brad to enjoy one more night in Santorini while we headed back to Kos and our final boat projects before starting our sail west.