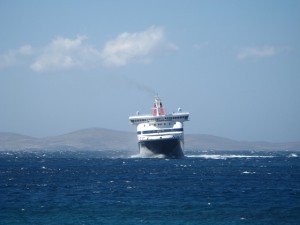 Our friends Mike and Julia arrived mid-meltemi to join us in Mikonos.  Meeting their ferry we watched it approach–a huge ferry heeling over in high winds looked ominous.  They are boaters so they took it all in stride. 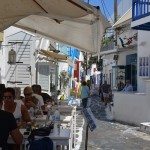 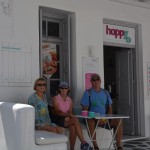 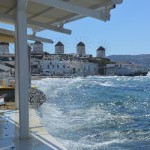 Over the next two days, as we waited out the remainder of the meltemi, we enjoyed relaxing on the beach at Ornos Ormos on the south coast, and exploring the narrow maze of alleys in Mikonos Town with their high-end shops and restaurants.  In town, the wind was so great the seas were crashing over a seawall along a line of tavernas under the signature windmills of Mikonos flooding out the patios where people sit. 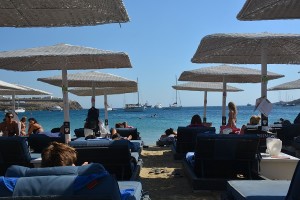 Ornos Ormos has a wonderful sandy beach lined with chaise lounges, umbrellas and fancy restaurants. We spent the day–a rare treat.  There are actually very few sandy beaches in Greece; most are pebbles or rocks and there are even fewer of those than one would expect.  Since the islands here where formed either by volcanoes or upheavals, most of the coast drops steeply into the sea.

With the meltemi subsided we moved on to Paros, south of Mikonos.  It appeared to be a perfect day for the spinnaker, that is after getting the twist out of the sock! 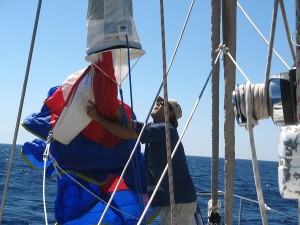 We finally got the spinnaker flying nicely up when the wind went flat.  As they say in the Med: “it is either too much wind or too little”.  We motored the rest of the way.  That night we anchored in Ormos Filizi on the northeast corner of Paros.  It is a wide open area with good holding and perfect water for swimming.  The following day we moved west along the northern coast of Paros and anchored off the marina at Naoussa. 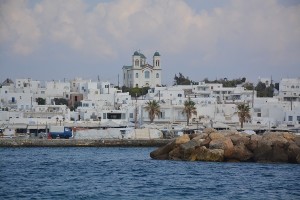 There was only enough space for a few boats right at the entrance but the location was perfect. We had a beautiful view of the town with the classic Greek Orthodox church standing proud on the ridge. There we went ashore and wandered the narrow streets typical of the Cyclades islands, and enjoyed a great dinner.

Paros is one of our favorite islands in Greece.  We moved around to the largest town on the island, Paroikia on the west coast.  P 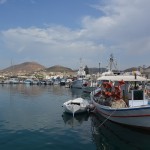 aros is a major hub of the Greek ferry system so is busy with ferries coming and going all day and into the night. We med-moored Quintessa on the town quay, always a good deal at about $10/night and right in town. Prices to moor on the quays are set in Athens and are standard across Greece. 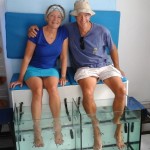 Wandering through the narrow streets of old town Paros, Bob and Julia found the “fish spa” and decided to have a go at it.   Sara and Mike chose to watch.  You dangle your legs in a tank of small feeder fish and watch them “eat” the dead skin off your feet. They thought it was a little creepy. Sara is sticking with a pedicure for the same result. 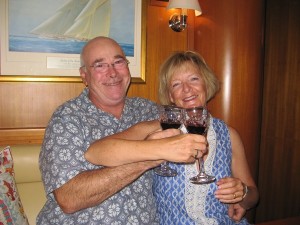 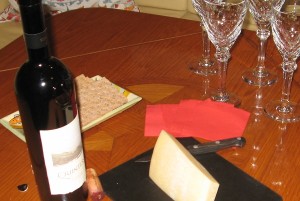 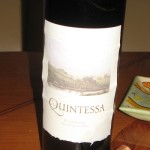 That evening we celebrated Mike and Julia’s ninth wedding anniversary with a special bottle of Quintessa wine and an evening at one of our favorite restaurants in Greece, Dionysos. Eleni, the proprietor was our server and we all had a wonderful time as usual. Celebrating Mike and Julia’s anniversary with them was very special for us as well–it was on their honeymoon in the Grenadines that we first met them.

Our last day together aboard Quintessa we decided to explore Andiparos, a small island just off the southwest coast of Paros, separated by a narrow, shallow bay.  Ferries travel between the two islands hourly.  Paros has the quick pace of a tourist island.  Andiparos is a contrast with a small harbor-front village backed by open fields and widely scattered homes. 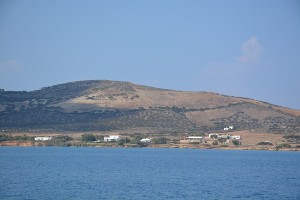 Very quiet, it would be a perfect spot for a getaway vacation with a stack of books packed.

We returned to Paros with time for a last lunch aboard before Mike and Julia boarded a ferry to go on and explore additional Greek islands.  We will rendezvous with  them again in a few days when we travel to Santorini by ferry.