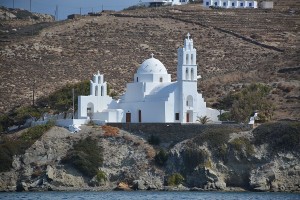 A year ago we spent time in Ios and it was nice to return to the island. 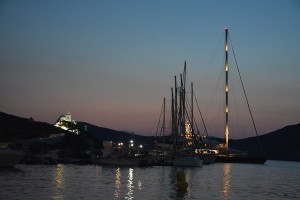 There is a traditional white and blue Greek Church perched on the end of the harbor entrance.

The church is a welcoming sight. It is even more beautiful in the evening light when the white walls are illuminated with artificial light.

With Quintessa tucked into a corner of the quay, we finalized plans to take the early morning ferry from Ios to Santorini, leaving the boat there for one night.  That would give us almost two full days to explore Santorini, and our friends Mike and Julia, who had sailed with us a week before would be there.   The high speed ferry took less than an hour. 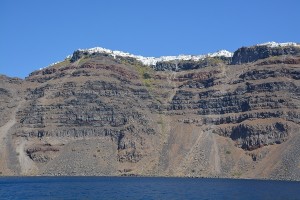 Santorini, known within Greece as Thira, is probably the most popular island in Greece.  It is spectacular with a thousand feet of multi-color cliffs rising out of the sea where one of the largest volcano eruptions ever took place around 1600 BC.  It caused part of the island to sink, leaving a caldera with the high cliffs along the east side.  Rounding the end of the island on the ferry, Santorini looks snow capped with the clusters of white buildings that line the crest of the island.

A visit was scheduled to Ancient Akrotiri, a Minoan outpost that was buried in ash by the 17th century volcano which is currently under excavation. 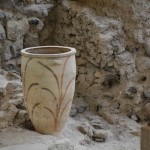 We waited an hour for a tour guide, then gave up and went through on our own.  While we could see the extent of some of the buildings, some three stories high, the signage did not have enough English to really tell the story.  A bit disappointing. 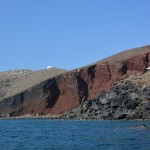 Also on the southern coast are three beaches – the red, the white, and the black.

Each is named for the color of the rock that that surround the beach. 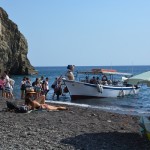 We took a small boat taxi to the black beach and enjoyed an afternoon of swimming before heading back to our hotel and watching the sun setting into the caldera from our balcony with a glass of wine in hand. 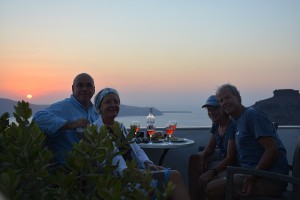 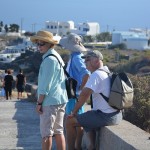 The following morning we headed off to walk the 10 kilometer trek from our hotel in Firostefani to Oia at the northernmost end of the Santorini. 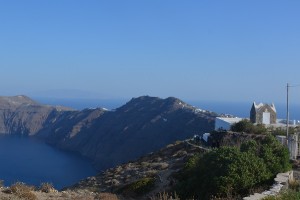 It is important to head off early armed with good footwear and water for the 3 1/2 hour hike along the caldera.  Part of the trip is walkways with lots of stairs as the altitude and surface change significantly along the way, including a dirt path before finally heading into Oia.

Along the way the views are spectacular, overlooking the hotels and pools that hang over the crest of the island like soft icing on a cake. 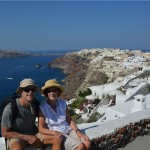 At the bottom there were several cruise ships and ferries in the harbor.  The walk was worth every step of it. 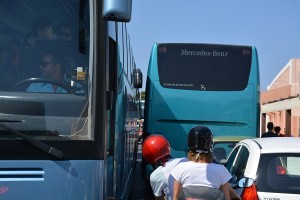 Once in Oia the extremely narrow main street was totally blocked by huge busses, small trucks, taxis and scooters all competing to get through.  After watching them for a few minutes we moved on realizing that it was going to take more than a few minutes to untangle the mess.

Oia has been restored following the devastating earthquake of 1956 which destroyed much of the island.  It is likely the most popular spot of tourists with many new high end hotels.  The views down the length of the island and caldera are wonderful.

After a few hours at a beach on the southeast end of Santorini we caught a ferry back to Ios and Quintessa. 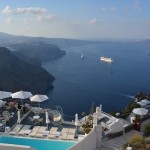 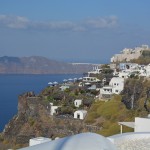 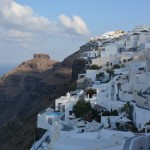 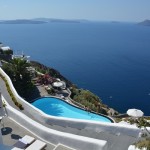 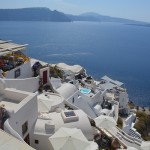 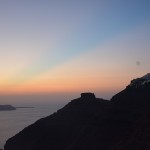