Our plan as we left Samos was to get to Mikonos over the next two days.  We started with a nice sail west, hoping to go into the small harbor at the eastern end of Ikaria overnight and use that as our jumping off point to Mikonos.  Ikaria is a long skinny island about 25 miles in length.  It is sparsly populated and has a very rugged coastline.

The area between Ikaria and Mikonos is known as the “corridor” and to sail it is a crossing of sorts.  This area between the Dodecanese and Cyclades is about 35 miles wide and during the meltemi season will often have meltemi winds winds blowing and whipped up seas.  The passage needs to be carefully planned.  We knew a meltimi was in the forecast and that we had about 48 hours to get to Mikonos or be stuck where we were for days.  With that in mind we created Plan A, Plan B, and Plan C.

Plan A was the small harbor at the eastern end of the Ikaria.  If that did not work out, Plan B was to sail south to the island of Patmos.  We love Patmos but, while it has some very protected anchorages, it was definitely out of our way and a meltimi can last 5-8 days.   We had guests arriving in a week and we were under the “S” word.  (schedule)  Plan C was to continue on and do an overnight passage to Naxos or Mykonos.  We had found an anchorage there that we could safely go into pre-dawn, but that is never much fun when you are tired and it is a new place.

Well, Plan A was not to be.  As we got near the harbor the winds and seas whipped up far too much for us to enter the harbor safely.   We backed off and started west toward the end of the island. 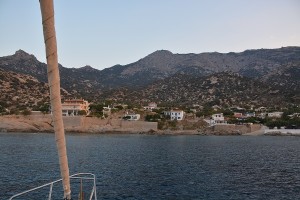 On to Plan B.  As we sailed west discussing our strategy and looking at the charts, it was now getting dark.  We managed to find a very small town on the charts, not mentioned in the cruising guide, which had an area just off the town waterfront with water shallow enough to anchor.   It was very exposed to the wind and seas, but we seemed to have good holding.  Bob generally dives on the anchor to be certain it is well set, but in the dark that was not an option. 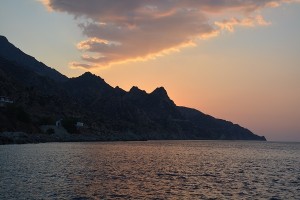 The population on Ikaria is only about 8,400.  It is a mountainous island of mainly summer homes.  Hearing the kids on shore laughing and playing together reminded me of wonderful evenings of hide and go seek after dark with the neighborhood kids in summertime.  It is interesting to note that Ikaria is a communist island, the only one in Greece.  The local elections put a communist mayor in office.  Another time we will plan on going ashore to check it out. 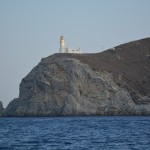 About 7 am we left Ikaria in light winds to cross to Mikonos.  As we rounded the western tip of the island we passed a picturesque lighthouse reminiscent of the New England lighthouses we are so fond of. 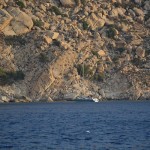 Just before the lighthouse we spotted another cruiser anchored right up against the rocky shore as well—great minds think alike.

After a couple hours into the crossing the winds steadly built and soon we were doing 9.3 kts.  It was exhilarating.  Bob filmed a bit of it with the rail in the water.  At about 1230 we arrived in Ornos Ormos the southern harbor of Mikonos, just as the meltimi was reaching full force and arriving ahead of schedule! 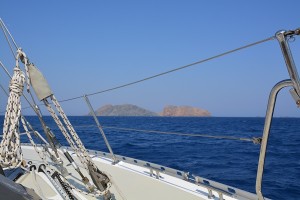 Fortunately the anchorage was fairly calm, allowing us to do some boat projects, swim at the beautiful sandy beach on shore, and do laundry and provision. In the bay across from us we were able to watch kite surfers show off their skills, soaring over 30 feet in the air as they crisscrossed the bay in high winds. 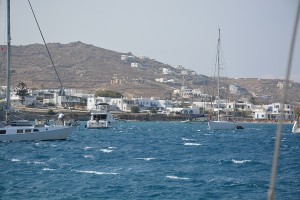 The meltimi blew for days creating dicey conditions throughout the anchorage forcing some boats to leave due to their anchors dragging.  Six days later the winds finally subsided enough that we were able to motor from Mikonos to Rinia, a small island about five miles to the west of Mikonos.

This entry was posted in 2013-2019 BLOGS, Greece - Cyclades and Crete, Greece - Eastern Sporades. Bookmark the permalink.