It was time to start our second swing through the Greek islands for this season.  Although our route would be similar to earlier in the summer and last year, we made a commitment to each other to visit as many new islands as possible rather than falling back on the familiar. 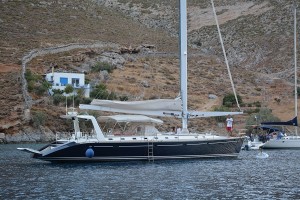 Our first night was back in Palionisou, Kalimnos, known for the red and white buoys installed by two local restaurants, available free to boaters.   A much protected harbor, it also has clear water for swimming–Bob got in his mile swim.

While there a beautiful flag blue boat pulled in with a very different type of rig.  It was so interesting we wanted to go over and talk with them but we had to push on.

Maybe we will be seeing more of these on the water in the future—we are sure there must be a funny nick name for it, perhaps “harpoon boat”.

Our next stop was the small island of Lipso, where we found an excellent anchorage off the south coast with good holding.  At Lipso we watched a perfect full moon rise over the island and, given enough time, we were able to capture it in all it splendeaur.  Next stop: Samos.

Samos is one of the “migrant” islands. With less than one mile separating Turkey and Greece, it is a popular passage for human traffickers. 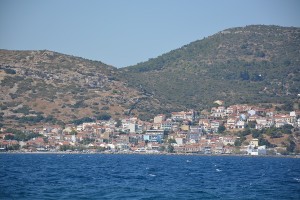 Samos, like so many Greek islands, looks from the distance like an abandoned mountain range spread across an island. 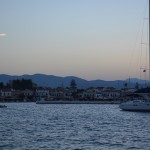 Arriving at the island one finds a mostly rugged, unforgiving coastline and scattered small villages with independent fishermen, cruising yachts, waterfront tavernas, and summer homes that are mostly used by Greeks along with a few expats. We anchored outside the marina at the town of Pithagorian on the southeast cost of Samos, with beautiful views of the pine covered hills behind the town juxtaposed with the mountains of Turkey in the background. 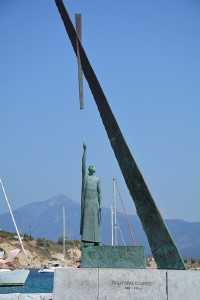 Over the next several days we explored the town historically known as the birthplace (570 BC) of Pythagoras, developer of the Pythagorean Theorem (A²+B²=C²).    A statue of him has been erected in the marina.

Saturday evening we watched the annual “Parade of Virgins”.  Local high school girls, dressed in togas, paraded through the main streets to a drum beat, arriving at the waterfront where they performed some dances, then boarded several old ships. 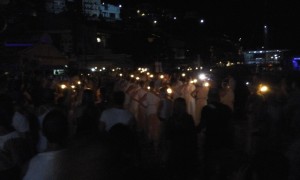 The ships motored around the small harbor with the girls holding lit torches.  Against the dark sky it was wonderful.

On our last day we went ashore again and visited the Archaeological Museum in the small castle there.  It holds artifacts from the 5th and 6th centuries.  It was worthwhile.  After the museum we found a pizza restaurant on the waterfront for lunch.  Discovering that they have a wood fired pizza oven, Bob stuck up a conversation with the owner and chef.  Bob thought the pizza was basically good and certainly fresh, but the crust was lacking and the mozzarella tasted funny. 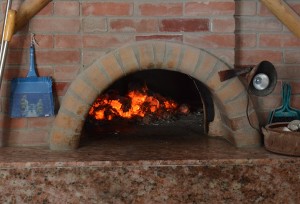 The cheese was easy to solve; it turns out it is too expensive for them to get good mozzarella so they substitute Greek cheddar with a similar melt factor.  Switching to a good Italian mozzarella would be a pricing decision—they were on their own for that one.  The crust on the other hand tasted like it had not been well developed in the rising or resting stages.  At first the owner was put off by all the questions but quickly realized Bob knew a little about pizza.  They had a great conversation and it became clear that he was doing all the steps properly.  They concluded mutually that maybe he should try a different flour, perhaps with higher gluten like a bread four.  He was appreciative of the suggestions.