The southwest coast of Turkey is called the Turquoise Coast.  Some also call it the Turkish Riviera.  By either name it has a natural beauty that almost takes your breath away.  The water is so clear it has a turquoise glow to it when the sun hits it just right.  The word “turquoise” comes from the word “Turkey”.   The name “Turkey” has roots that have been traced back to the 2nd century BC, but more recently is in reference to the Chinese term for “combat helmet” that the Mongolian ancestors of modern Turkey used to describe the mountains of their homeland in the 6th century AD.

After getting a late start, following a walk around the harbor, we decided to make a short day of it and just cross to the other side of the large outer bay of Fethiye Korfezi. The large bay is popular for sailing enthusiasts as it offers brisk winds off the mountains and flat water, an unusual combination in this part of the world. 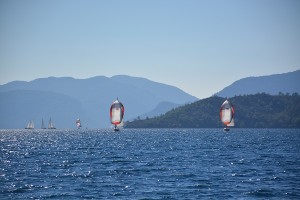 For the night we went into the marine protected area of Skopea Limani.   This area, made up of dozens of small islands, is especially beautiful and unspoiled.  Most of the pine tree covered islands have no buildings and are surrounded by rocky outcroppings with lots of little indents, perfect for mooring.  The Turkish government is very serious about this area remaining pristine and they inforce an even higher level of environmental protection regarding  black water, grey water and even the soaps that are used.  To further protect the habitat and the crucial posidonia sea grass, anchoring is prohibited.  The government has installed moorings throughout the islands with bollards ashore to attach long lines to.  That keeps boats from swinging and allows more boats to enjoy the area. 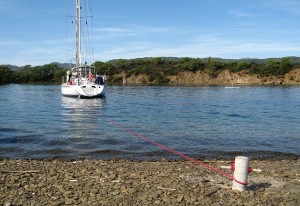 The system is fabulous—it offers the benefits of anchoring with long lines ashore without the hassle of setting an anchor and finding an attachment point on shore, plus it protects the environment.   We appreciated the ease of mooring and, at the end of October, had the area mostly to ourselves, save a few day tripper boats.

It was so beautiful we decided to stay two nights and enjoy one full day.  After spending the morning on practical things like reorganizing our filing system on board, we packed a picnic lunch, put on our swim suits and took off in the dinghy to explore the area.  We checked out several of the islands then found a spot with a very small rocky beach and a spectacular sight of the layers of mountains across the bay.  It doesn’t get much better than this!  Turkey is a major charter cruising area for British, Germans, and Russians, but is an undiscovered hidden jewel for Americans.  Sadly, for all the effort to protect this area it is still subject to litter, mostly plastic, washing ashore from other areas.  When is the world going to wake up and outlaw “single use” plastic? 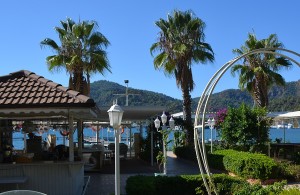 From our wonderful anchorage we motored two miles north the following day to Gocek, a small town and major charter base. 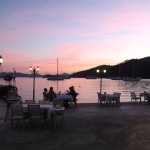 Anchoring off the main part of town, we soon noticed a boat near us flying an American Flag.  The boat’s hailing port was Houston, TX, not Delaware!  Wow, they must actually be Americans, a rare sight.  A surprise since we see so many boats here with tiny US flags, which are registered to Delaware, for tax purposes.   We took the dinghy and went over to introduce ourselves.   We met Frank and Barbara aboard “Destiny”.  They had bought their Island Packet 480, center cockpit, in San Diego and double-handed it to Thailand.  Their journey started in 2008 and they are still sailing.  We ended up having a great time with them over the next several days.  They showed us their favorite spots in Gocek, Barbara gave Sara a lesson on the foods in the grocery store for best brands and name interpretations, and we did a trip to the open market.   They have now headed back to Houston for the winter, but we are looking forward to seeing them again in the spring.

Turkey is known for its hospitality.  We have found that to be accurate.  Aside from being very friendly, even when there is a language barrier, once you have had a brief conversation with a local Turk, they often offer you tea. Several times we enjoyed hot tea with merchants  while talking about the local area, customs, etc.    One afternoon we headed out of town for some exercise and found ourselves near a rural hotel and spa.  As we were looking it over, the owner saw us and invited us in to see the rooms and grounds.  His English was limited but we were able to learn a bit about his business and the projects he was working on.  He offered us tea while we enjoyed the fabulous views from the deck.  Limited in our ability to communicate well, we learned that he also raises chickens and believes that one should eat two eggs every day.  As we were saying good bye he insisted on giving us two fresh eggs to take home with us.  It was a kind gesture.  We put one egg in each pocket and headed on our way being careful to not bump into anything on the hike back.

This entry was posted in 2013-2020 BLOGS, Turkey - Lycian Coast. Bookmark the permalink.