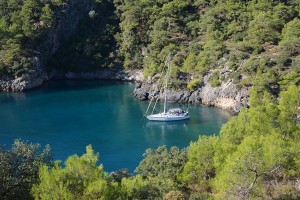 Kas (pronounced ka-sh) is the furthest east we will sail in Turkey this season.  As our string of favorable weather continues, the days are still warm but the nights are starting to get cold so the LL Bean slipper socks are out of storage and back in use for early mornings.  Until the weather changes we are taking our time and enjoying every minute of our Turkish experience. 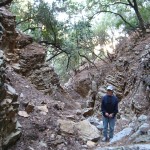 On our way to Kas we found a tiny secluded anchorage (long lines ashore) in one of the hundreds of deep calanques (steep walled deep ravine) in the area.  One could probably squeeze 5 of 6 boats into the anchorage—this night we were all alone.    The next day we hiked up through one of the canyons which reminded Bob of his Grand Canyon trip only smaller. 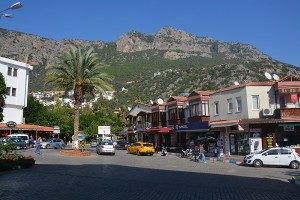 Kas is a beautiful hillside town with narrow streets and quaint restaurants and shops.
The town square, right off the old harbour, is the center of activity with people sipping tea in sidewalk cafes and children engaging in ball games. 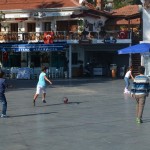 That harbor is small with shallow water depths, too shallow for Quintessa.  There is another harbor close by with the new marina aptly called Kas Marina, where we are now.  It is one of the nicest marinas we have been in. The marina, like the rest of Kas shows a pride its appearance.

The grounds and buildings are well kept, there is no trash on the ground, they seem to actively recycle, and there is no graffiti. 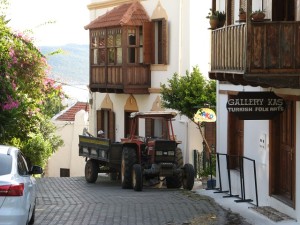 Bougainvillea trees in Kas, filled with hot pink and orange blossoms, as well as the oleander trees also in bloom, fill the city streets with color and beauty.  Not to mention the fruit trees which are everywhere as well.  At this point they are heavy with several types of oranges, pomegranates and pears.    We have never seen so many pomegranates and are enjoying the seeds every morning for breakfast in yogurt.

Kas markets itself as a place for adventure travel, with scuba diving, paragliding, four-wheeling, hiking and boating opportunities.  It is less busy than many of the other cities along this turquoise coast because of its distance of over two hours from the closest airport but that may be a plus.  Like other tourist areas, it becomes very quiet in the winter.   Some of the restaurants have already closed for the winter.   With two walks per day between our marina and the center of town, we are getting our daily exercise of about 5 miles, including hills, which we enjoy.

Yesterday we went to the weekly open market.  It takes place on the edge of town and runs all day long.  Along with an endless assortment of produce and fish they also have stall after stall of clothing and accessories, many with U.S. labels such as Adidas, Columbia and Gucci.  With the extremely low prices we do wonder whether they are really knock-offs.  Even in the stores we find brand names for very cheap prices.  I point blank asked one guy if the labels were genuine.  He admitted they were “genuine fakes”.  When I told him that it is illegal to do that in the US, his response was that it is also illegal in Turkey but they do it anyway and get away with it.  The leather, handbags, etc. all looked really good but we weren’t tempted—our ethical side said it is not right.  Also, inferior quality aside, by purchasing fakes you are often unknowingly supporting unfair labor practices, environmental assaults and animal cruelty.

Dogs seem to be important members of the community, competing with the volume of cats about.  The dogs here tend to be large with some golden retriever in many of them.  They hang around all over the city and are very docile.  Some have collars; many do not. 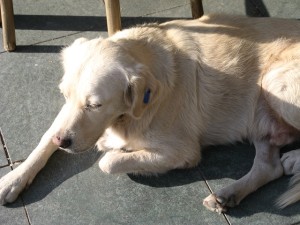 When we asked about them and why many are wearing a blue plastic tag on one ear, we were told that the tag lets people know that the dog has had all of its shots, even if a stray, and generally been neutered.   Some residents live in apartments that are too small for dogs.  Their dogs stay on the streets and the owners spend part of the day, outside, with their dogs.   Dogs are accepted everywhere – restaurants and grocery stores included.  We saw one dog sleeping on the floor in the middle of a restaurant with everyone walking around him.  No one urged him to move.  Both the dogs and cats are well cared for by everyone.  The unfortunate result is that most need to be on a diet! 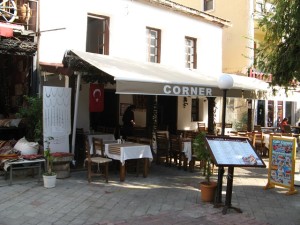 Having lunch at a wonderful little restaurant, Café Corner, we spent a long time talking with the owner.  This is his first year with the restaurant and he already has good ratings on Trip Advisor.  That is not a surprise as both the presentation and quality of his dishes was excellent–every part cooked to order.  He also explained that he is Kurdish, having grown up in the eastern part of Turkey.  There are few jobs there, forcing people to move to central and western Turkey for work.   Since we always hear about the friction between the Turks and the Kurds, we asked him whether he was treated differently or badly because of being Kurdish in this area.  He said no, that he is treated equally.  His being Kurdish has not caused problems for him.  That was nice to hear.

In talking about the Turkish government’s interest in joining the European Union, he was another among many locals we talked to who told us they do not believe Turkey should join.  He believes that it would be too much of a financial and cultural challenge for Turkey.  People seem to be aware of the plusses and minuses of membership in the EU and were thoughtful in their opinions.

The weather is starting to turn and the long term forecasts are including more wind.  We are heeding the sign and have decided to make our way back to Marmaris for our winter stay.

This entry was posted in 2013-2020 BLOGS, Turkey - Lycian Coast. Bookmark the permalink.