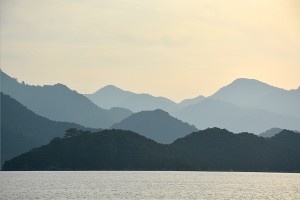 The bay of Fethiye is one of the prettiest along the Turquoise Coast.  It is surrounded by layers and layers of mountains, providing that sense of “purple mountains majesty” as the sun rises and sets.   It also provides excellent protection from winds and seas from every direction, once tucked into the end of the bay.  With high winds forecast from the south, we tucked all the way in to the end of the bay to anchor.  After our first night we moved in to Yes Marina, a small marina near the end of the bay.  The books had told us it was a long walk to the town, but as walkers, that was perfect for exercise.

For the next few days the storm came, and came, and came.  After a very dry summer season, it was hard to believe so much rain could fall.  With it came wave after wave of thunder storms.  By the time it ended we bailed over a foot of water out of the dinghy.

Fethiye, like Marmaris, was devastated by an earthquake in 1958.  Almost everything was flattened.  Only a few original buildings remain, scattered around the town, now they are empty and in severe disrepair.

While walking, we found the fish market and produce market, surrounded by small restaurants.   Here, you choose your fish from any of the vendors, take it to the restaurant of your choice in the market and they cook it for you.  They will add a salad and garlic bread, and you eat it there—all for just 8 TL (about $3), plus the cost from the fish monger. What a deal!  We ended up purchasing fish for two dinners (about $15 total) and taking it back to the boat instead.  We plan to come back in a few days to experience the cook-on-site arrangement.  On to the produce market, we bought cucumbers, carrots, pomegranates, tomatoes, pears, eggplant and zucchini, all for about $5.  Walking home we stopped for a loaf of bread, another 35 cents.  We had been told that food in Turkey is inexpensive.  Other than the boring white bread, it is also of high quality.  We will have a very healthy diet this winter.

Our last morning, before leaving Fethiye, we went for a walk around the end of the harbor.  After days of rain we were surprised at the volume of trash in the water.  We had not been making water while here and now never will up here in Fethiye.  The end of the harbor is lined with boat yards, mostly working on the large wooden gulets.  We spoke with some locals who were taking a tea break from the large boat they were working on.  They were now fiberglassing over the wood bottom.  When that is complete the boat will be refloated, and the inside fitted out with it in the water. 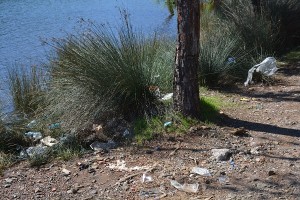 This area of Turkey has such strict rules about washing decks with soap, holding tanks, grey water, and oily bilge water discharge, which it closely monitors, but what about litter?  We are impressed and agree with the new pollution regulations but fear there is a double standard.  The volume of empty plastic water bottles, plastic bags, bottle tops, etc. was disgusting.  Not to mention all the trash piles and runoff from the numerous boatyards. After the rain, the volume of debris that washes into the water was very sad to see.

The clouds were starting to break up and the sun thinking about shining so it was time to move on and discover some of the pristine islands outside the bay.

This entry was posted in 2013-2019 BLOGS, Turkey - Lycian Coast. Bookmark the permalink.

One Response to Fethiye