Not yet ready to surrender to the end of
the season we confirmed our winter reservation with Netzel Marina in Marmaris and headed back to sea.  About five miles south we tucked in to Turunc, a small village filled with day tripper boats of tourists to the area and water taxis back to Marmaris. It also has two or three really nice resorts catering to families. 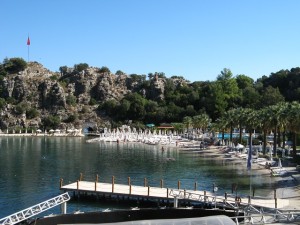 Our usual swing-by to check out the landing area on the quay at Turunc showed the tie ups to be rings rather than bollards.  (Bollards being a post that can be lassoed with a loop of line ourselves).  That meant that without someone to catch our lines as we backed in, loop them through the rings, and throw the ends back to us, we had to do the entire process on our own. There was no one around.  Bob had just observed a charter captain and professional crew handle the same situation successfully so we thought, why not try their system?  That meant that, before we even started to back up to the quay, out in the harbor, we set up the passarelle and attached carabiners (large snap hooks) to the end of the med moor lines which we pre-cleated to the boat. 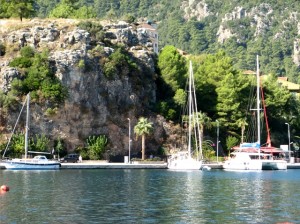 The carabiners were then hooked to the end of the passarelle and the line coiled to pay out on its own.  Then, after we dropped the anchor, as Bob backed the boat up to the quay while letting chain out by remote control, Sara crawled out to the end of the passarelle and waited.  When close enough to the quay, she jumped and grabbed the hook ends of the dock lines.  Putting one or both of them through the rings on the quay, she then went back across the passarelle to pull in the bitter end and re-cleat to the boat.  Bob’s task through this was to keep the boat straight and in place, not always an easy, especially if there is a cross wind and other boats nearby.  He held it perfectly in place.  The entire process had gone very smoothly.  That called for a high five!

The following day we did a long walk around the village then motor sailed east to Ekincik, a large open bay surrounded with hillsides of pine trees, as well as olive and lime trees.  We both got in long swims before dinner. 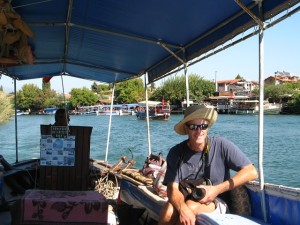 Turkey is rich with history and we want to experience as much as we can while here. Thursday we were picked up at our boat by a Turkish kayik  (African Queen style tour boat) for a trip up the Dalyan River to the village of Dalyan.  The river delta is mostly marshy grass, looking much like the Everglades. Our captain, who spoke almost no English, skillfully navigated our kayik through a maze of channels that meandered for miles through the delta.   Along the way we stopped at Caunos, an archaeological site currently being restored.  Alexander the Great had ruled there around 350 BC.   Remains include a theater, temple, baths and marketplace, all of Roman origin. 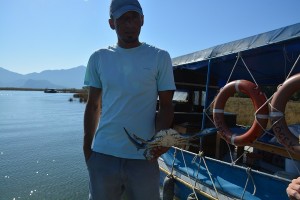 Further along, the captain stopped at another boat of the same style, anchored in the marsh.  That boat had been set up as a takeout restaurant. 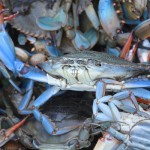 The crew caught blue crabs right off the boat, steamed them on site, and sold them ready to eat on your own boat, or packed to take home.  We had no idea there were blue crabs in the Med!  Having developed a taste for blue crabs from spending so much time on the Chesapeake Bay it was too tempting to pass up.   We ordered two crabs for later pick-up. 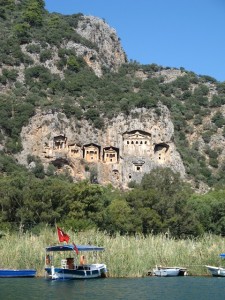 Dalyan is most well-known for the King’s tombs carved into the rock cliffs along the river near the town.  It is hard to imagine workers, likely slaves, hanging on the sides of the cliffs cutting away rock.    There are about a dozen that appear complete and others just started.  The design and logistics of these pre-BC tombs are truly amazing.

On our way back from Dalyan we stopped again at the little restaurant boat (Blue crabs are the only thing on the menu), and picked up our 2 crabs that they had steamed and packed in foil, ready to eat.  Back at our boat they made a perfect appetizer as we reviewed the wonders of the day.

After a great day of touring and history we had a day of boat reality, which included rebuilding the water pump for the generator and getting caught up on our way-out-of-date blogs.  By the end of the day the pump was finished and the blogs were current.  Cheers!

We took the dinghy to the beach to wash the bottom and found the bees to be relentless.  It was not a few, but hundreds, with nests in the sand every few feet.   That was the quickest wash job the dinghy ever had and we scurried back to the boat.   The bees had been constant visitors to the boat forcing us to keep the drop board in and not hang out in the cockpit.  Since the weather forecast showed the winds turning to the south and we would not be protected, it was a good time to move on.  We decided to head to Fethiye, located in a large bay totally protected by land.  It exceeded our expectations.

This entry was posted in 2013-2020 BLOGS, Turkey - Lycian Coast and tagged historical-notes. Bookmark the permalink.