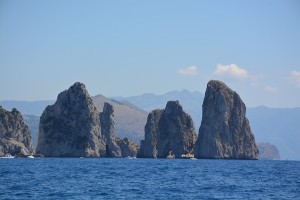 The following morning we were off to Capri with about 20 knots of wind.  A great sail but as we got closer to Capri we realized that the sea conditions and wind direction were pushing us further south for comfort.  We turned and headed down the west coast and along the bottom of Capri to get out of the north east winds that were gusting to 25 knots and causing confused seas.

Capri was a surprise.   Known as the pearl of the Bay of Naples, it is a major tourist destination and the most famous of all of the Islands off the coast of Italy.   It was occupied in its early days by the Greeks and then the Romans.  Augustus traded it for Ischia.  Smart guy.

Capri is surrounded by high limestone with craggy cuts into its sides.   A number of grottos have formed, large enough for small boats to motor into them for a look around.  As we motored along the coast we passed dozens of small tour boats, filled with tourists, heading for the grottos.  One of the more popular grottos is called the “Blue Grotto” and is featured on Rick Steves Italy video series.  The island only has two access points which made it easy to protect in Roman times and, today, limited areas of protection to anchor in anything but settled weather.

We finally arrived at the Amalfi Coast, again a surprise.  It is far less built up along the coast than we had imagined. From the tip of the peninsula at the southern end of the Bay of Naples heading east along the Amalfi Coast, the land is steep hills and few homes.  Then you arrive at Positano, about eight miles east of the tip. 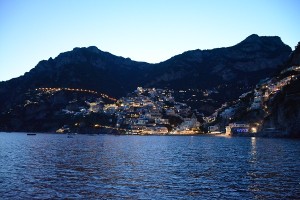 Positano is the major destination of the Amalfi Coast.  It sits on the side of a steep, very steep hill leading down to the Med, with buildings hanging over one another.
In the main part of town, all but one street are pedestrian only; that street is one way and only wide enough for one vehicle. There is nothing to do but shop, eat and drink, and hang out in the sun.  The art galleries have unique quality art.  Brightly painted Italian pottery is everywhere; and linen is a major product in this area as well. 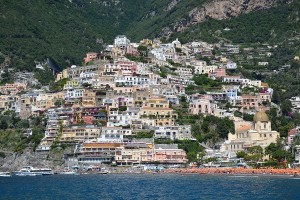 he waterfront is very narrow with only one dock for boats.  It is pick up/drop off only with a waiting line of boats most of the time.  The ormeggiatori run the waterfront.   They manage the mooring field and run the water taxis.  Since there is no place to land the dinghy we are forced to use the water taxi to get back and forth from shore.   Interesting that the price for the water taxi is based on the length of the boat.  The bigger the boat the more you can pay.  The rate for our water taxi ride is just less than the cost of the mooring for a day.  They will get the money one way or another.   The down side of the water taxis is their speed. Each time they pass the boat lurches around from their wake.  We have the stove on pivot to keep the tea kettle and anything cooking from flying off.  The drivers tear through the harbor full of bravado, with complete disregard for safety.  It has certainly cut back on swimming any distance from the boat. 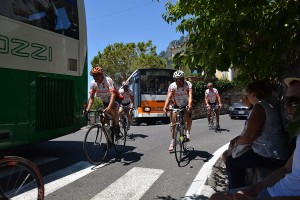 It was time for a road trip.  The bus ride between Positano and Sorrento is famous for the amazing Italian engineering of the roads hanging on the side of the mountains between the towns that allow them.  They are filled with twists and turns and very narrow.  Two buses passing one another can call for one to have to back up for them to both complete a curve.  There are traffic control officers at various places to assist with the negotiations. The mirrors are tucked in and if extended beyond their current position the buses would not clear. 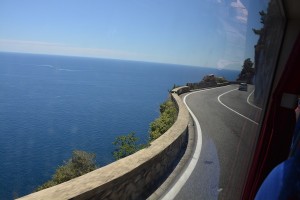 Off to Sorrento we hung on while the bus maneuvered the curves.  Bob filmed it to show the hairpin turns on the Cliffside roads and the traffic passing one another.  Sorrento is a clean city with every potential open space filled in with lemon, orange and olive trees.  It is best known as a safe and pretty area to stay in while day hopping to Naples, Pompeii, Capri and the Amalfi Coast.   By itself there is nothing particular fascinating, but people are friendly and it has magnificent views of the Bay of Naples and Mount Vesuvius.

We headed back to Quintessa for one more night in this beautiful spot as the winds were forecast to be gusty with a Meltimi passing through the Adriatic on the other side of Italy.

Tomorrow we are on to Scaria and other points south before arriving at Palermo, Sicily to meet guests.

One Response to Capri and Positano