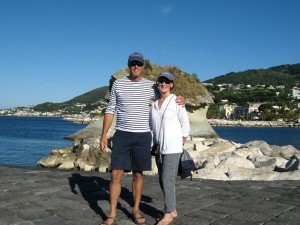 Shhh…we are only sharing this information with family and friends.  The island of Ischia is our newest find and our new favorite island to date!   It has been described as Capri without the crowds.   We want to keep it that way!  Located off the northwest end of the Gulf of Naples, it is the largest in a chain of volcanic islands.  The good news is that the volcano on Ischia has not erupted since AD 1301.  Today it is the centerpiece of the island, visible for miles in every direction, and covered with dense semi-tropical vegetation.    The rest of the island has scattered villages on every side of the island separated by areas of rocky cliffs and plentiful agriculture.

In 500 BC Ischia was the site of a Greek settlement.   Earthquakes and a volcanic eruption ended that in the 5th century BC.   The Saracens occupied it in the 7th and 8th centuries and the Pisans in the 12th century, and finally the Romans.  The name Ischia comes from the word “insula” meaning “the island”. 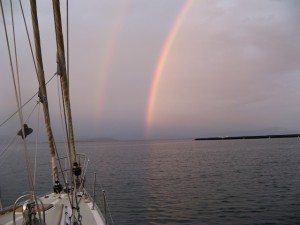 When we left Gaeta, after a week and a half in the marina, and one night on the hook where we witnessed a complete double rainbow followed by a vibrant sunset over the mountains.

The next day we had planned to go to Ponza for one night. Ponza is southwest of Gaeta and shortly after leaving the harbor at Gaeta we realized that we would be beating to Ponza which would be pretty frustrating.  Change of plans; and we headed to the island of Ventotene, almost due south and on the way to Ischia, our next planned destination.  Good choice for a day of fabulous sailing on a broad reach.

We arrived at Ventotene and found a good spot to anchor for the night just outside the old harbor.  Since we needed to keep an eye on the anchor for a while to be certain we were not dragging, we decided not to go to shore.  In addition the seas were a bit rolly.  It is now on our list of spots to stop at on our way east again.   These islands all have histories and soap operas of their own.  Supposedly, Octavia, the wife of Nero, was exiled to Ventotene at the request of Nero’s mistress.   Later Nero had her killed and her head presented to his mistress.    Makes you wonder; did the mistress possibly say to herself, hmmm, if he did that to her will he do that to me?

It was a rough night with little sleep as the boat switched from rolling to pounding in increasing seas.  By 0330 we were both in the salon reading waiting for daylight.  By 0600 we were anchor up and heading to the island of Ischia.   By 0900 we were happily at anchor off the harbor of Lacco Ameno, in the NNW corner of Ischia.  What a beautiful spot!  Good holding with protection from south providing calm seas.  Calm seas, that is, when the day trippers are not heading in and out of the small anchorage.  They begin arriving around 1000, bake on their decks all day with an occasional dip to cool off, then are gone by 1700 when we would get the anchorage back almost to ourselves.

We went ashore to explore the village and found a quaint main street with shops, lemons, gelato cafes, lemons, restaurants, lemons, waterfront “beaches” with chairs and umbrellas on the rocky (no sand) waterfront; oh, and did I mention lemons!  Yes, we have arrived at the west end of the land of the lemon.  The entire Naples Bay area, islands, and Amalfi Coast are famous for their lemons, and they know how to market them. 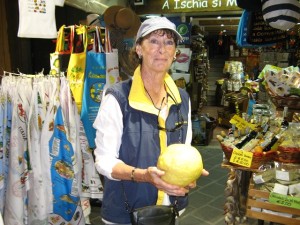 The lemons here are in three different types.  The most photographed are the softball sized lemons that are bitterer and used primarily for marmalade.  The two smaller types are more football in shape and are used for juice, lemon cakes and lemoncello.    There is also lemon soap, lemon perfume, lemon cookies; not to mention the candy and chocolate with lemoncello filling.  You get the picture. The local pottery is also gorgeous and you don’t have to look very far for a shop that sells it.  It is everywhere.  We picked up a nice serving platter with a fish motif and what else? Lemons!

The views from the boat were fabulous.  The sides of the hills are lush green with seemingly every open space growing lemons, olives, grapes, tomatoes, and zucchini.  Looking out to sea we had a perfect view of Mount Vesuvius, the coast of Italy and its islands. 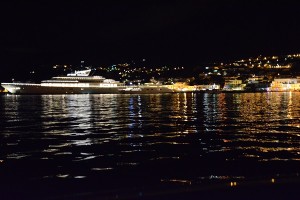 In the harbor beside us was the superyacht “Rising Sun”, at 454 feet long, the largest privately owned vessel in the world.  It is owned by the founder of Dreamworks.   A boat of that size, we imagine, would have a crew of fifty.

The following day we spent doing boat projects, including washing and waxing the bottom of the dinghy.  On day three the winds and seas were not our first choice.  With the wind from the northwest and seas from the southeast there would likely be a swell that would be uncomfortable.  We left early with the plan to head for Capri unless the seas were rough, in which case we would anchor at the eastern end of Ischia near the castle.   We only got to the east end to decide that the castle anchorage was a good spot for protection and the castle looked fascinating.  Anchor down.

Castello d’Ischia (Castle) Anchorage: 40° 44.05’ N by 013° 57.70’ E: Poor holding over light grass in 15 feet of water, no protection from the north and some exposure from the south east which can allow swells to move through anchorage and become rolly. 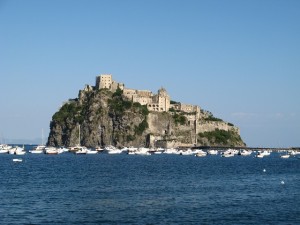 As with the hill towns of Tuscany and Umbria, hill towns by definition were built high up on rock with little or no access for enemy raids.  The “castle” at the eastern end of Ischia is actually an entire hill town built up on rock with absolutely no way to get up there other than by crossing the causeway from the mainland.  Once the gates were closed at the end of the causeway, the town was sealed — with the Mediterranean Sea making a pretty good moat! 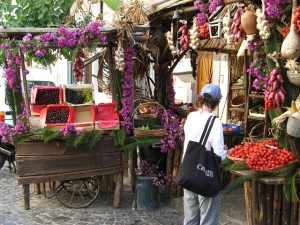 We wandered around the town and bought some vegetables at an adorable produce stand.  Along with our change we were given two free lemons.  It was nice and kept with the theme of the island.   Stopping for a cold drink at a café overlooking the water, we were entertained by what appeared to be a grandfather teaching his grandson how to row a boat.   While the teenaged boy looked tired and bored, his grandfather stood statuesque in the boat the entire time showing off his Italian speedo and tan to anyone who would look at him.  That poor kid went back and forth across the harbor front half a dozen times!