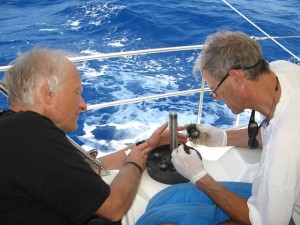 Winds were strong and we sailed for the next few days, completing 175 miles in the first 24 hours.  That is good.  Day three Ken and Bob took the winch apart and repaired it.

The seas were rolly enough to send an entire pot of coffee flying across the galley.  Good news is that no one was burned,  Bad news – it took an entire roll of paper towels to clean up from walls, cabinets, floor and even inside the refrigerator, where it ran into the cracks around the door.  (Days later I even found coffee in the bottom of the cheese container.)  Oh well – ship happens.

That evening the water pump failed having shut down automatically four times in the past 24 hours.    Another project at sea.  No wonder the definition of cruising is – fixing your boat in exotic places!  On a positive note, Quintessa has both an auxillary pump and a foot pump as well.  We were never without water.  Not many boats have that much redundancy – love it!

Bob spent 4-5 hours repairing the water pump and, while in there, reconfigured the electrical connections so it will be easier to do repairs in the future.  The problem turned out to be the same switch he had replaced a month earlier.  The switches were hand delivered by guests joining us in Provo.

Being so mobile and in foreign countries, we are dependent on incoming guests to bring parts we have ordered and had delivered to their homes.  All guests know their departure to come and meet us is getting close when Fed Ex and UPS start showing up at their door on a daily basis.  Friends have brought everything from a new storm sail, 90 feet of line for the spinnaker, a case of dissolving TP, treats from Trader Joe’s, and assorted electrical parts.

We have established a new watch schedule, which we put into effect on the sail from Provo to Bermuda.  Each crew member has watch 3 hours on, 5 hours off, with the first and last hours overlapping.  It was rated positively by the first crew so we continued it for this trip.  It gives everyone more time to get much needed sleep. 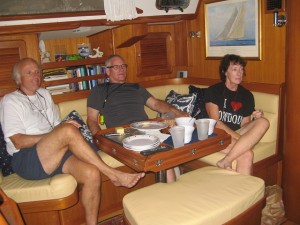 For a break in the routine we had movie night and watched “African Queen”.  Bob kept watch throughout and even made popcorn for the viewers.

There has been very little boat traffic as we cross.  It is possible to hit a cargo ship in the middle of the ocean though, watches are important.  At 6 am one morning we had a 750 foot cargo ship off our starbard coming at us.  Following it on radar and AIS, we could see that it was going to be too close to ignore.  The AIS system provides data on nearby ships, including their name, size, speed, destination, their closest point of approach to us, and how soon that will be.  When this particular ship was about three miles away, and moving fast, Sara radioed it by name.   They did not respond to the first two calls.  The third may have contained a bit of edge in her voice as we were under full sail and needed to know their intention and whether we needed to change course.  They suddenly, and quietly, changed course and went behind us.   Guess they did not want to deal with an angry female in the middle of the Atlantic before morning coffee.

Both Ken and Doug are great cooks so we are eating well.  They are both creative and resourceful as well.  Sara is enjoying the galley companionship and learning new things from them.

We had the boat at 8 kts for most of the day under sail.   The stars at night are magnificent with the big dipper right over the boat.  The moon is only a quarter and setting early so the nights are very dark.  Sometimes it is difficult to differentiate the sky and sea at the horizon.