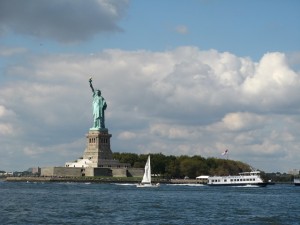 About 11 am we left New York and motor sailed all day and night down the coast of New Jersey.

There were light winds from the north and very rolly, short chop seas, making a miserable night with the dishes banging in the cabinets.  Once we rounded Cape May about noon the following day, we had the protection of the land.  The seas calmed to mirror-like and the day was beautiful.  We sailed up the Delaware Bay.  Just after dark we entered the C&D Canal. 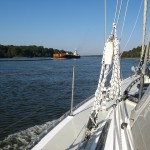 About half way through the Canal we heard a couple calling for help and could see a blue light in the dark.  We could not get near the shore with the boat or hear what their emergency was, so we called 911 and reported their location.  The police called us back later to say they had dispatched a cruiser and found nothing.  They assumed it was a prank.  We pulled into Chesapeake City and dropped the anchor about 9 pm.  Happy to be there!

Chesapeake City is a cute little town that time forgot.  Their location brings in lots of boats to tie up for the night or have lunch/dinner at the waterside restaurant there. 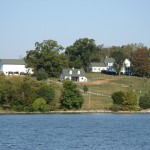 Otherwise there is not much.  We wanted to mail some postcards and there is not even a mailbox in town.  The Post Office is located several miles outside of town.   Years ago a bridge was built to connect the two sides of the canal.  The result is that most people driving through the area keep on going and no longer stop in town.  It killed the local economy.  We were told there is a bike path planned on that side of the canal which should bring in tourists.  It will be a very pretty ride along the Canal and make a great weekend getaway, staying in Chesapeake City.

This entry was posted in 2013-2020 BLOGS, US - Chesapeake and Delaware Bays. Bookmark the permalink.