About a half hour before we would have arrived at our anchorage on Long Island, Bob looked out the back of the boat and saw that our dinghy was gone.   We had been towing it.   The yellow painter line was floating, still attached to the boat.  The shackle, which had attached the painter line to the dinghy, must have come apart.  The rigger from the boat yard had just replaced it a few days earlier.  Bob normally wrapped it in wire to provide additional security.  The rigger had evidently not done the same, and we never checked it.

We turned the boat around, started the engine, and used the GPS to retrace the route we had been sailing.  We also used the binoculars to scan the horizon and see further in the distance.

Bob radioed the U.S. Coast Guard, reported our dinghy missing, and gave them a description of it.  It is a white, 10 foot dinghy with a red gas tank in it and a set of oars.  The Coast Guard asked us for our cell phone number in case someone found the dinghy and wanted to contact us.

Within just a few minutes we heard the Coast Guard make an announcement over the radio to all ships and boats asking them to keep a sharp lookout for a ten foot white dinghy adrift and to report any sightings to the Coast Guard.

When we were almost back to our starting point for the day in Connecticut, Bob made a general radio call reporting our missing dinghy, and made it clear in tone that we were going to pursue it.  Within about ten minutes we received a text message on our cell phone from the person who had found our dinghy!  He is the captain of a 164 foot super yacht of Russian ownership.  They had found our dinghy floating along and had pulled it up onto the back of their yacht.  Under maritime law they had found the dinghy and could keep it.  We appreciate their honesty. 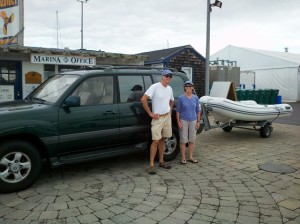 We returned to Stonington and picked up the same mooring we had used the night before.  The next morning we borrowed Mike and Julia’s car and trailer and drove to Newport, RI where the super yacht was docked.  We gave a gift to the crew of the yacht and thanked them for saving and surrendering the dinghy before we drove the dinghy back to our boat in Connecticut.  We are very relieved to have it back!  It is our car for a this journey, and a new one at that!