We motored, in calm seas, almost sixty miles straight offshore from Durres, Albania to Bar, Montenegro.  When we crossed into Montenegro we did the mandatory change of courtesy flags excited that we had finally made it, two years later than planned! 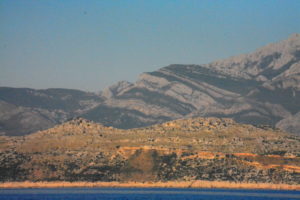 The scenery along the coast was spectacular. The rock formations at the water’s edge were really unusual especially in the foreground of the mountains that in places showed dramatic dark striping owing to their sedimentary formation millions of years ago. 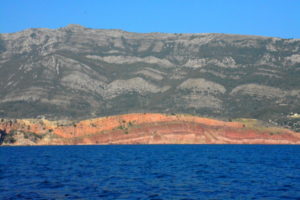 Bar is the most important commercial port in Montenegro. The harbor was pretty quiet when we arrived so we tied up right in front of the Customs dock where we were efficiently checked in with the authorities.  To our surprise when it was time to pay the taxes and fees with our check-in they would not take cash! What? Kostas, this is not Greece anymore! Why, we asked? We were told by the customs officer that if they were allowed to take cash, there would be no accounting for it.  To the credit of the Montenegrin government, in their effort to deal with corruption they will not allow a monetary transaction that cannot be tracked.  Bravo to them! The first of many things that have impressed us about Montenegro. They happily accepted a credit card and off we went. 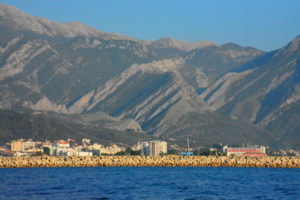 With check-in completed we moved the boat to the marina next door for the night.  Checking out the restaurants along the local promenade we found that every one of them offers pizza, pasta and risotto.  Like Albania, Montenegro is across the Adriatic from Italy and the Italian influence is strong.

The following morning, after wandering around Bar to see the town we were not too impressed. The town was OK, but we were really happy we did not book our winter stay here.  The town needed more time for gentrification as it appeared that not much had been done since its communist days. 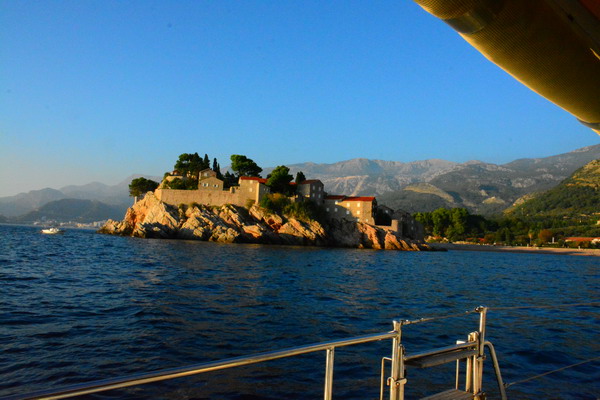 Later that day we motored the twelve miles north and anchored off the island of Sveti Stefan in Budva.  It was late enough in the season that the island was pretty much closed for the winter.  We were the only yacht in the anchorage.

Sveti Stefan is an island community that was founded in the 15th century after a successful raid on a Turkish pirate boat.  It was fortified with thick outer walls to protect its residents from pirates. 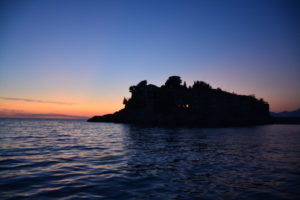 It is now a very high-end resort operated by Aman Resorts with a causeway connecting it to shore.  The causeway, with a security gate, is accessible only to guests. Currently it was completely deserted except for one room which we could see was occupied once the sun went down — probably the security guard.

In the morning we went ashore to explore and had coffee at the restaurant “Olives”, a nice spot overlooking the island and bay.  There were a few people on the beach but overall it was pretty quiet this late in the season in spite of being Saturday.

The next day was another day with no wind so we motored again, passing lots of newly constructed hotels and apartment buildings. 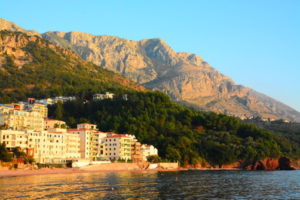 Montenegro has strongly encouraged investment from outside of the country with what appears to be little urban planning, and zoning.  It has boosted the country’s economy, but the development seems a little hodgepodge. Aside from the development spots the coastal scenery was stunning with the tall black mountains in the background.

A turn into the Gulf of Kotor opens up to three bays connected by narrow channels.  Tivat, home to Porto Montenegro, is located at the far side of the second bay, just before entering the Bay of Kotor at the end. 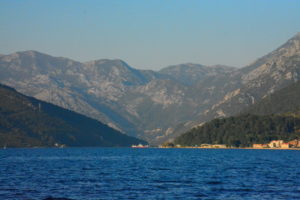 Passing through the Gulf we noticed several new marinas and supporting villages are currently under construction. The Bay of Kotor is deep and bordered by towering mountain peaks.  It is called the southernmost fjord in Europe, although technically it does meet the strict definition of a true fjord.

Porto Montenegro was a welcome sight.  The marina is on the sight of a former naval base that was established in 1889 by the Austro-Hungarian government.  By the end of Yugoslavia it had become less important.  Private investors stepped in and have turned the base into one of the most upscale marinas in the Med.  It caters to mega yachts but also welcomes little guys like us!  The setting is beautiful with the bay surrounded on three sides by mountains, and the marina set in the middle with an exquisite marina village of shops, restaurants and condos. Click on this link to see an aerial tour of this amazing marina and village:

After settling into our slip and checking in with all the formalities we went for a relaxing dinner at the marina’s pizza restaurant to celebrate our arrival. 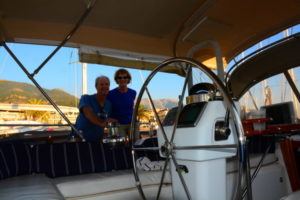