Bademli Limani–where you ask? In the middle of nowhere! But, we will get back to that. This morning there was a fresh chill in the air. It was time to finally start south and work our way back to Marmaris where our slip is for the winter. There are few boats out sailing now with the temperature dropping and the winter storms starting to line up. We have had a wonderful time exploring new places along the 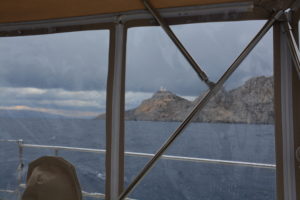 Turkey coast this season and are happy to have made it this far north.

Today we also put in the final sections of the plastic cockpit enclosure—a sure sign that the sailing season is winding down. Within a few miles out we were glad we did. It really cuts the wind and enables us to enjoy the solar heating of our cockpit.

We motored, then sailed, then motored working south over fifty miles tucking between the Greek island of Lesvos and the coast of Turkey being careful to stay on the Turkey side of the border. Twice in two days we were radioed by the Turkish Coast Guard asking where we were coming from, where we were going, and how many people were aboard. They never approached our boat but we could see them in the distance. Our AIS provides them with our basic information of boat name, size, speed and direction. They merely check the boat information on their computers to know our names, and whether we, and the boat, are currently legal in Turkey. The question on the number of persons aboard is due to the heavy volume of migrants who have crossed into the EU at Lesvos from Turkey over the past three years. Lesvos has received more illegal migrants than any other Greek island. 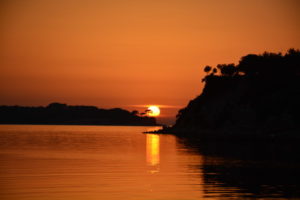 We will be held accountable for the number of passengers we declare on the radio should they decide to later board us. 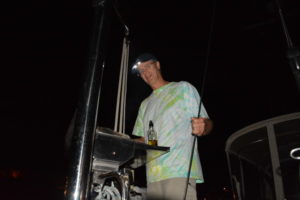 At the end of the long day heading south we pulled into Bademli Limani.  Bademli Limani is a harbor with a small channel between the mainland of Turkey and two small outer islands. It is located directly across from the southeast corner of the island of Lesvos, Greece. Coming down from the north we tucked into an anchorage just north of the main channel. It is very weather protected with a rural fishing village ashore and a natural looking resort on the small island. We got the anchor set and spent sunset watching the fisherman coming and going in their small boats and grilling a wonderful fish dinner.

We set off fairly early the following morning planning to go to Eski Foca for a nice dinner out—not to be. Motoring south through the main channel, following the track we had used going north a few weeks earlier, we were both in the cockpit going along at our usual cruising speed, about 6 knots, watching the scenery go by when… Suddenly, we came to a complete stop!! A quick check of the depth showed us in six feet of water. What the heck? The GPS showed 13 to 20 feet of water and the guide books showed it as a navigable area. Clearly, our information was all wrong–we were aground. 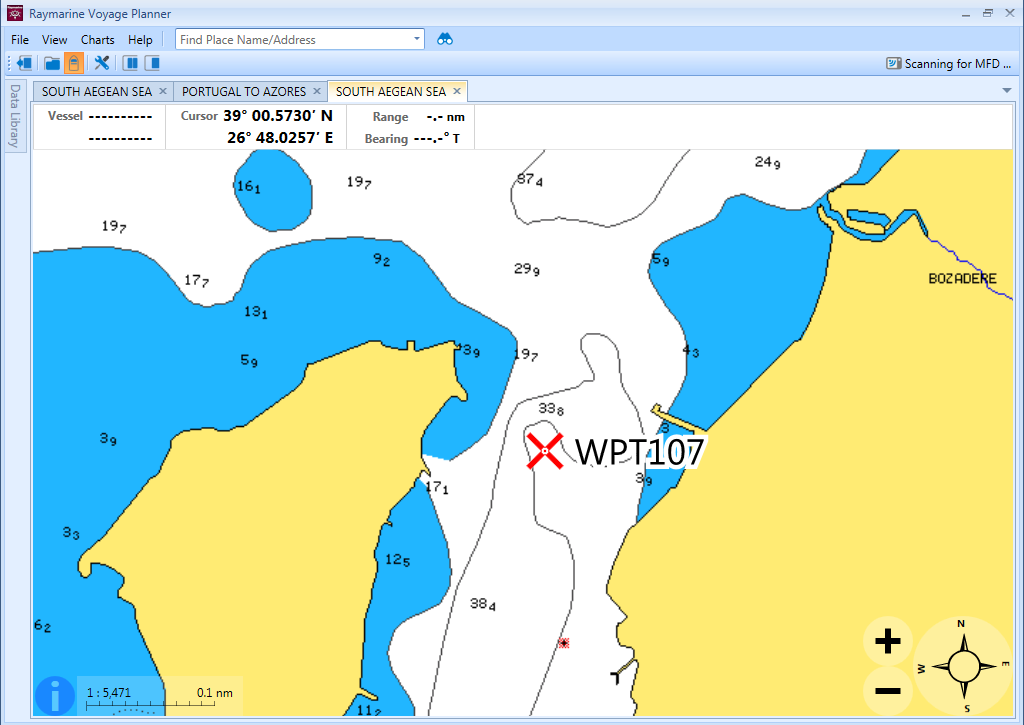 Navionics chart showing ample water where we went aground at the X.

We tried backing off, but no such luck. Bob then dove to check the bottom. The rudder was free, thankfully, but the keel was dug in hard. We were not only aground we were hard aground—a new sensation for us. Over the next three hours we attempted to drive off, kedge the boat off, and heel the boat off. In the course of our operation three Turkish boats, two of which were small fishing boats with a single fisherman aboard, stopped to see if we needed help.  Between the few Turkish words we know and gestures we were able to say thanks but we would be able to manage it ourselves. We hoped! Turks will always try to help you out – another thing we love about Turkey. The first boat that stopped had two English speaking men from the resort. They told us that the charts are wrong and the area is very shallow due to shoaling, other than one narrow band of 30 foot water in the channel. The value of local knowledge.

Finally we managed to get free, but with a much delayed start, we decided to return to our anchorage from the night before.  With a glass of wine, for medicinal purposes, we spent the rest of the day reading in the cockpit and regrouping from the experience. When we left the next morning we motored out the northern part of the channel where we had entered and skipped the main channel. As we counted all of the things that had gone right that day before, absent one, we also included good weather because now the wind was blowing 35 kts up the channel with very rough seas.

Technical footnote to the grounding recovery: Of the many techniques the we have learned over the years cruising, it was no one trick that got us off the shoal, rather it was the simultaneous use of all the techniques that proved successful. The following were the techniques that we used individually in the order listed (from simple to complex), then all at once:

Fortunately, the grounding was in sand and during calm weather.  A quick dive determined that there was no damage to the boat and that we could proceed. If the bottom of the sea had been rocky, 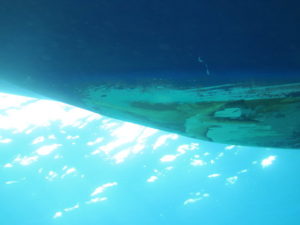 All in all, the day had a happy ending and we were better for the experience, less a little bottom paint. Serendipity works in wondrous, but not immediately apparent, ways.