On March 23rd we said goodbye to our beloved Barcelona and started our trip back to Turkey and Quintessa.  We rented an apartment for January through most of March, again enjoying the cosmopolitan city and friends we have made there.  It seems to be becoming our second home.

Arriving in Istanbul with a six hour layover before our flight on to Dalaman in southern Turkey, we decided to jump into a taxi and head into the city to see the Blue Mosque and Aya Sophia museum.

The Istanbul airport is a bit confusing, so attempting to get some clarification we found the Information booth.   That was a wonderful reminder of the Turkish cultural challenge of cueing up and waiting in line.  The concept is good, but the Turks seem unable to manage it. 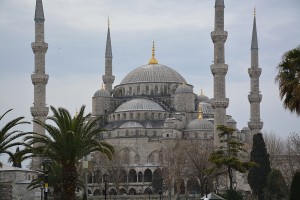 Given a waiting line they, who place great importance on hospitality and kindness, suddenly unravel into being all elbows and shoulders, cutting in with athletic determination.  All very humorous, but talk about herding cats… The Blue Mosque is likely the most photographed building in Istanbul.  The collection of domes and six minarets are beautiful. 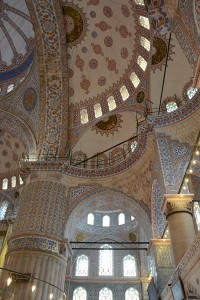 The inside of the still active mosque is decorated with 22,000 hand painted tiles, dominated by the color blue, giving it the unofficial name of Blue Mosque.

The Aya Sophia, almost beside the Blue Mosque, was built as a church in 537, converted to a mosque in 1453, then declared a museum by Ataturk in 1935. 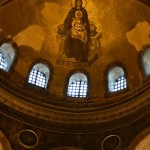 Its rich history adds to the amazing architecture and beauty. It was interesting to see both Islamic and Christian features side by side.

Istanbul was a wonderful experience: culture, history, culinary, people, and traffic!  Oh, so much traffic!  The 30 minute ride into the city was a 1 1/2 hour trip back to the airport. Having not taken rush hour into account, we found a wonderful taxi driver who was willing to take on the challenge.  We made it just in time for final boarding, loading Sara onto a luggage cart, given her bad hip, and sprinting the final 100 yards to the gate.  The gate agents, enjoying the humor of the scene, rushed us onto the plane to take the last two seats.

While Bob talked Turkish politics with the guy sitting on his left, Sara bonded with the guy on her right, holding his hand psychologically speaking, throughout the flight.  He who was already terrified of flying in calm conditions, was doing his absolute best to endure a flight which was, admittedly, one  the roughest either one of us had experienced. It all really got interesting on final approach into Dalaman, when the pilot suddenly aborted the landing and pulled up, deciding that the winds were too high.  We diverted to Antalya, about 5 hours east of our destination by car.  After landing, the plane spent 45 minutes on the ground while the airline determined the next step.  When they finally announced that the plane would be returning to Istanbul we announced, to each other, we would be staying here.

They allowed everyone off the plane, sorted the luggage on the tarmac (an interesting experience) and established that a bus would take anyone who wanted to travel by road back to Dalaman, about four hours west.  It was already almost 11 pm and, having been up since 2:30 am, we rented a car and got a hotel room.  We decided that we would drive ourselves back to Marmaris and see a bit of this charming area of Turkey on the way.

Antalya is located on the south coast of Turkey, a resort town and major conference center.  Their most well-known recent conference was the G20 Economic Summit, held here last October with most of the world leaders in attendance.  You would think we could find a decent hotel room.  Necessity over charm, we found the “Days Inn” of Turkey and settled in.  We finished dinner at 2:00 am in a local restaurant where the owner agreed to keep the kitchen open and the staff fell all over themselves being helpful!

We decided to stay in the area for two days before heading back to make the most of the situation.  The next day was spent exploring the waterfront area near the ancient city of Antalya.  Parking, being a challenge, we finally found what looked like an open spot in front of a barbershop.  Lots of hand waving ensued to indicate this was not available.  Then, not only did the person who was having his hair cut, smock still on, get out of the chair to come out to the street to explain in English where we could park; but he insisted in having his friend walk in front of our car to personally guide us the two blocks to the lot and explain to the attendant what we needed.  This was another heartwarming example of Turkish hospitality.  Incidentally, the cost of that space for three hours was 5 TL, about $1.75. 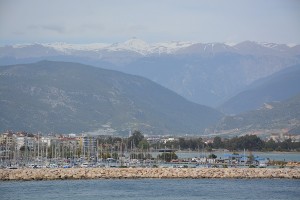 Day two of our passage west was rewarded by experiencing two new seaside towns: Kemer and Finike. Delightful areas, but again not finding the charming hotel in the quaint area we imagined, we settled for the all-inclusive, buffet for the masses, vacation resort.  Not exactly what we had in mind.  Continuing west another several hours the following day, it suddenly occurred to Sara that we had left our jackets in the hotel room in Kemer, two hours behind us.  We turned around and headed back where the hotel staff had them waiting for us.  That accomplished, we decided to divert north back to Antalya and take the northern route back to Marmaris to shave about an hour off the trip.

We found a fabulous B&B in the old town area of Antalya, with mostly pedestrian only, very narrow streets.  The hotel is from the Ottoman era (1600s) oozing with charm.  Again the hospitality is amazing here.  After a wonderful dinner with live jazz we decided to extend our stay by another day and really see the area. 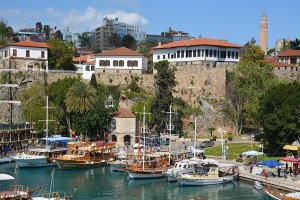 Yesterday, we walked the waterfront checking out all the boats and bought fresh simits from a street vendor.  Simits are circular bread (like a thinner bagel) typically encrusted in sesame seeds. 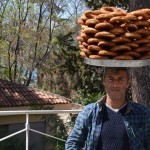 Vendors either have a simit trolley or carry the simits on a tray on their head. These were really good ones! We then took an old fashioned tram across part of the city and spent the afternoon at the Antalya Museum, the largest archaeological museum  in Turkey. It included a collection of stone artifacts including a sarcophagus of Dionysos. 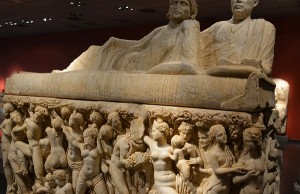 The stone carving is amazing. We could have spent a few more hours there. Turkey actually has more artifacts than Greece, and these were excellent examples.  Also especially impressive was a 2nd century AD statue of Hercules.

It is hard to believe that we were actually further east from the boat than when we landed in Antalya four days earlier!  It was a Turkish delight and one we will always remember!