After signing barely a two paragraph rental contract, the local car rental company, who also owns one of the local and wonderful restaurants on the island (Roula’s Grill House), entrusted us with an old Hyndai to traverse the peaks of Cephalonia.   About half way through the trip, it suddenly occurred to Bob to stop the car and check the tires and brakes.  All was well and we continued with slightly more piece of mind. 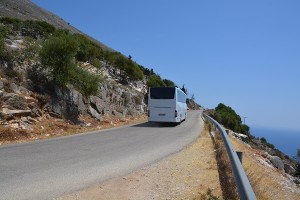 The roads in Cephalonia are a challenge.  None of them are straight or flat.  The trip from Fiskardho, on the northern tip of the island where the boat was, to Argostoli, the capital at the southern end of the island where we were picking up Kathy and Brad, is only 20 miles as the crow flies but took 2 1/2 hours to drive.  We seem to have driven a route in the shape of the letter “Z” getting to our destination.  Creating those roads was an engineering feat, as they hang on the sides of the mountains and wind from peak to valley. The entire center of the island is one mountain after another and we seem to have gone over all of them.  Most of the trip had breathtaking water views from both sides of the island.  Although slightly disconcerting it provided ideal views of neighboring islands and the small towns scattered across the island. The lack of guardrails in a lot of places was unfortunate–we noted the large number of roadside shrines along the route! 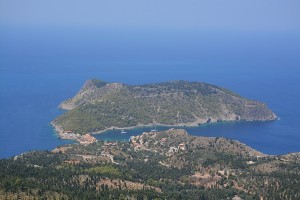 Heading back north together, we stopped for lunch at the small town of Assos which was built in the 16th century. The narrow road leading from the mountainside drive down to the village was a serious set of switchbacks, both sharp and steep. 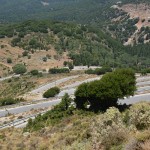 At one vantage point where we stopped to enjoy the view, we counted six switchbacks all lined up.

From there we headed back to Fiskardho for one last night and evening out enjoyed at the restaurant at the base of our pasarelle (Vasso’s).  Kathy and Sara had not seen each other since Sara was home last, six months ago, so there was a lot of catching up to do, which was great.  Not to mention the meal which was also great as was the table service, although the boat was so close we figured we probably could have had cockpit service… 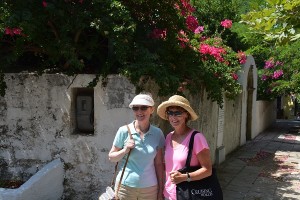 This entry was posted in 2013-2019 BLOGS, Greece - Northern Ionian. Bookmark the permalink.