Bozburun and Bodrum, Turkey: Bozburun was our port of entry into Turkey last year.  Exactly one year later we were back, docked almost in front of the same restaurant on the town quay.   Mehmet and his partner Osman at the restaurant, Osman’s Place, speak English and are the go-to folks for all information.  They have good mezes, free WIFI, laundry service, and even the schedule for the bus and open market.  It was great to get reacquainted.

The bus to Marmaris from Bozburun takes a bit over an hour.  Taking it to Marmaris gave us a chance to enjoy the great views of the harbors around the peninsula while someone else drove.  We spent a full day picking up boat parts and checking in with vendors for upcoming projects.  Have we mentioned how good Marmaris is for boat parts? — Sort of Toys R Us for cruisers!

Bozburun’s weekly market is a combination of local produce, cheese, spices and household goods.  Turkey is definitely the place to top up on spices with so many to choose from.  We have found new ones and combinations that we enjoy and are using them more frequently in cooking. 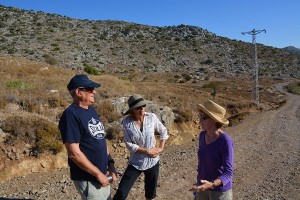 Who knew that cinnamon and cumin together with dill would be so good with sautéed vegetables?  This is pomegranate season and the trees are heavy with ripening fruit, so we loaded up with some fresh pomegranates. 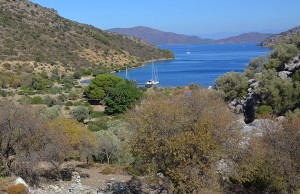 Bozburun before we all took off heading west along the Turkish coast. Both couples ready for some exercise, we took the morning and hiked over the mountain to a lovely tranquil bay named “Paradise Bay”. 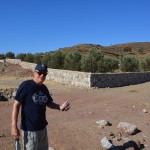 We hope to sail there next year.  Bushwacking part of the way we really appreciated out off-line GPS phones. 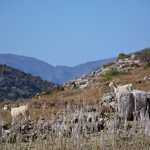 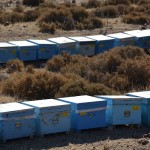 and we were out numbered hundreds to one, for both species!

We spent our first night anchored in Kuruca Buku, just east of Datca.  It is a large quiet bay with few boats and excellent holding.  There is a sandy beach and camping ground ashore.  The western side of the bay gave us good protection from the westerlies that were blowing and the whipped up seas they had created.  One night there gave the seas a chance to calm and we motor-sailed north to Bodrum, where we anchored in the harbor at Gumbet, the first harbor to the west of Bodrum.  Gumbet is a suburb of Bodrum and has developed into a holiday community, with condos scattered across the hillside and restaurants lining the beachfront.  As in so many other holiday areas, the music in Gumbet is in full swing at night.

The bus to Bodrum is only a 20 minute ride and arrives in the center of Bodrum.  After a wonderful lunch at Musto Bistro on the waterfront with the freshest salad ever, we did a bit of walking around. 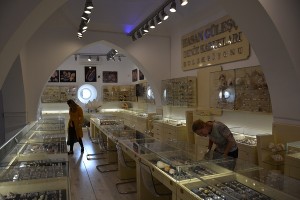 Bob found the Maritime Museum which was closing shortly, so after a very brief visit we decided to return the following day.

We did so and discovered the museum has the most complete collection of Turkish fishing boat models and seashells from all over the world.  Each shell was labeled with the name and country it was from. 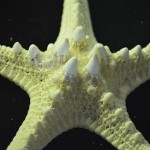 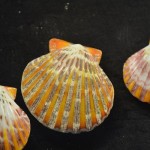 The Philippines provided the largest contribution of unique shells.

Leaving Bodorum, our sail north to Didim started out quietly as we motored into the wind.  We thought that as we rounded the Bodrum Peninsula and headed north again to Didim that we would be able to start sailing.  Instead we found ourselves with two challenges.  First was an invasion of roughly fifty gulets heading straight towards us.  Gulets are the large (100-200 ft) wooden boats, custom made in Turkey and primarily used for tourists.  They are designed as sailboats, but we rarely seen any actually sailing. 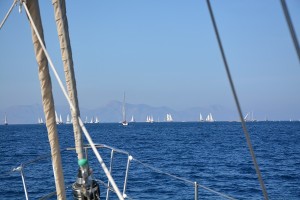 This group was under motor, some with guests aboard.  They must have been doing some type of rally, and were escorted by two Turkish Coast Guard boats.

We found ourselves weaving among them, as few seemed interested in adjusting course for us.

We had barely cleared the gullet parade before realizing, as we saw another fifty or more traditional sailboats ahead of us, that we were headed into the annual Bodrum Cup sailing regatta.  They were all under full sail so we changed course and enjoyed watching a bit of the race as we passed by.  While the main regatta was mostly to our port, there was a second set of races to our starboard of Optimists, suggesting there was a children’s regatta going on at the same time.   Optimists have become a worldwide boa t for teaching kids to sail.

A few miles past the regattas, the winds whipped up to 25-28 kts and we sailed, rail in the water, to Didim where we checked in to D-Marin.

This entry was posted in 2013-2020 BLOGS, Turkey - Carian Coast. Bookmark the permalink.