Robert and Alyssa spent a day with us exploring Palermo by foot.  The most unusual spot we visited is the Catacombs.  The mummified bodies of over 8,000 people from Palermo are housed there, from between the 17-19th centuries.  Some are lying down, but most are hanging from what appears to be hooks with bailing wire around their bodies to keep them together.

As one walked down the aisles and rows the corpses were within touching distance—Ugh, we walked in the center.  They are dressed in their finest clothing.  Men and women are in separate hallways.  To suggest it was bizarre is an understatement.  It was very creepy.   Evidently people would plan their outfit in advance, and some would even go into their planned space and try it out for size!

From Palermo we headed east along the northern coast of Sicily.  It is a fascinating island with tall mountains and (mostly) inactive volcanoes.  Steep up the sides of the hills there is all sorts of agriculture.   No one has a lawn as we know them.  All open space is growing produce.  Between that and the volume of fishing, Sicily appears to be quite self-sufficient in terms of feeding its people. 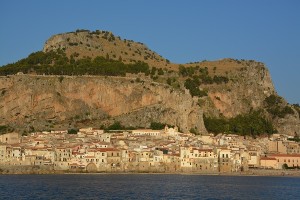 We anchored off the beach in the town of Cefalu, an active summer community.  The old town is a web of narrow old streets filled with restaurants, shops, kids, bikes, and motorcycles.  We had a wonderful time wandering around enjoying the pottery we have started to love.  Yes, we bought a ceramic table made of volcanic rock and hand painted glazes.  It weighs roughly 100 pounds, so it is not the new cockpit table for the boat.  It is being shipped back to the U.S.   Small detail – we do not have a home to put it in at the moment!  We also purchased a large ceramic plate that would be beautiful hanging on a wall.  After chatting with the retailer/studio we come to find out that they just received a huge order to supply similar hand painted plates to TJMaxx in the United States.  They told this with great pride and were probably a little surprised that we did not share their enthusiasm.  Unfortunately the credit card had already ben rung through and we did not have the heart to say–forget it! 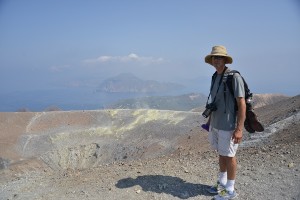 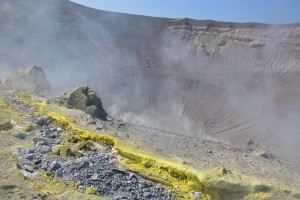 We headed back to the Aeolian Islands with more time to explore Lipari and Vulcano.   Lipari is an active tourist area, with great cafes and shopping.  On to Vulcano, aptly named, with its volcano that is venting steam most of the time.  Bob and Robert climbed to the crater at the top where the steam vents were.  The sulfur fumes were repulsive but the scene was like we were on another planet.  There were sulfur vents everywhere each with a growth of bright yellow sulfur crystals.  The hike was well worth it the effort to see a live volcano like this. 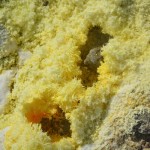 On Friday we journeyed into the Strait of Messina, the body of water that separates Sicily from mainland Italy at the toe of the boot.  If the weather and/or seas are whipped up it can be a dicey passage.  We had both calm wind and seas, so motored easily through.  Most impressive was watching the swordfish boats out fishing.  Swordfish regularly migrate through the Strait of Messina so swordfish boats are always present in calm weather.  They are easily distinguishable.  They are a long, narrow boat with a very tall steel mast that has a crow’s nest on top.  Two of three men are hoisted to the top where they operate the boat to search for swordfish. On the front of the boat is a bowsprit that is longer than the boat itself.   Out on the end of that there is the man responsible for harpooning the fish. 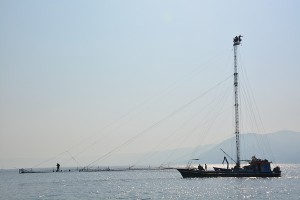 The swordfish evidently sleep on the surface and move slowly, enabling them to be harpooned. We watched, in amazement, as more than a  dozen of these boats worked their way in circles and up and down the waterway in search of swordfish.   We did not see them land any swordfish but evidently they are successful as we saw swordfish for sale in every market.  There is even some in the freezer!

We motored to Reposto, where we pulled into a marina for two nights.  It gave Robert and Alyssa an opportunity to go to Mt Etna, just ten miles west, and us the opportunity to do boat projects like laundry, provisioning, and finding boat supplies.  Mt. Etna has been erupting since the 1600s with the most recent major eruption in 2001 when lava flowed for almost two months, threatening some villages.

Robert and Alyssa headed back to the U.S. and we continued south to Syracuse (Siracusa) to stage for our crossing to Greece. 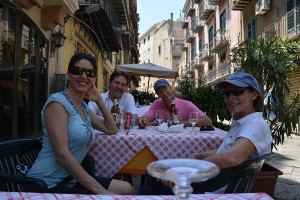 This entry was posted in 2013-2019 BLOGS, Italy - Sicily and Lipari Islands. Bookmark the permalink.

One Response to Aeolian Islands and Guests