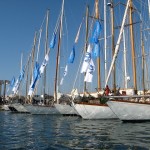 We dinghied in to the marina to discover the Cannes Classic Boat Regatta was in full swing and the crews were getting ready to head out for a race.  What an exciting time to be there.  Most of the boats were from the 1920s and 1930s, and from 50-200 feet in length.  Several had no engine and were being towed out to the start.  We spoke briefly with a crewmember on an American boat and found that it is based in Newport and was moved to Cannes aboard a ship. 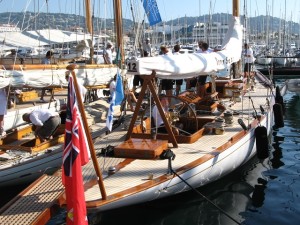 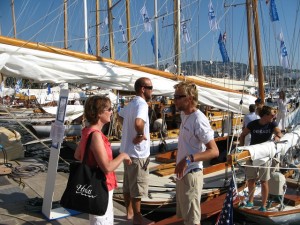 It did not sail across the Atlantic.  This race was to be the last of this regatta.  The following day they would all race from Cannes to St. Tropez.  Next week is Les Voiles de Saint-Tropez (St. Tropez Race Week), an annual event that is the closest thing to Antigua Race Week in Europe.

Cannes was what we expected with shops for all of the big name designers, waterfront restaurants and excellent people watching.  The beaches are a combination of some public and many private, owned by hotels and restaurants.  The private beaches provide a chaise and umbrella for full or half day rental.  Several of the high end hotels also have piers with chairs and umbrellas so one does not have to get sandy while tanning.

It was the classic boats rather than Cannes that had caught our interest, so on Sunday we watched the magnificent parade of yachts leaving the marina for the race starting line, then weighed anchor to join them. We were able to cruise around the edges of the group and appreciate the view while Bob took tons of pictures. 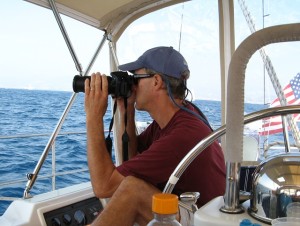 At the start the first mark was back into the harbor which provided another parade opportunity before they took off across the coast to St. Tropez.  It was a beautiful sight and we were thrilled we were able to be there.  The distance for the race is about 25 miles so the extremely light winds were going to make it a long day.

We only had about 10 miles to travel so in spite of the light winds we sailed and enjoyed the day.  Once we were out in very deep water we decided to let out the anchor with 250 ft of chain and take the twists out of the chain.  Not an exciting project, but one more check off on the “to do” list.  The twists in the chain were causing the windlass to skip occasionally while raising the anchor.  Not a safe thing when fingers and toes are nearby.

We anchored for the night in the harbor off Juan les Pins, an upscale town that is part of Antibes.  Again we were surrounded by huge sailing boats, most over 150 feet and several motor yachts.  We realized that the Monaco boat show had ended the day before so many of these boats had likely been part of the show.